Rout in Gujarat, boost in HP: Congress's road to 2024 will be tough 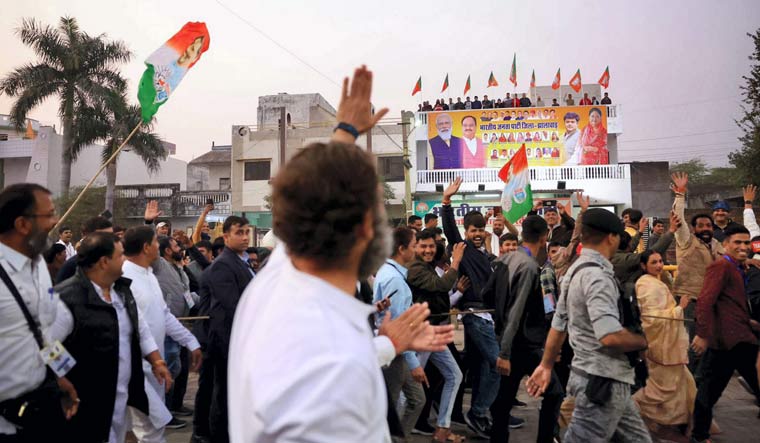 The Congress on Thursday suffered its worst-ever defeat in Gujarat but appeared headed for a close win in Himachal Pradesh, a mixed bag result for the party that not only faces a rampaging BJP but an ambitious AAP vying for the leadership of the Opposition going forward on the road to the 2024 general elections.

While the grand old party seemed likely to wrest Himachal Pradesh from the BJP and keep the "rivaj (tradition)" of alternate governments in the hill state alive, it suffered a crushing defeat in Gujarat where it was likely to get just 10 per cent of the seats in the 182-member assembly with the AAP getting over 12 per cent of the vote share.

In Himachal Pradesh, the Congress found itself in a better position leading on 40 seats with a vote share of over 40 per cent with the AAP at a dismal third with about one per cent vote share.

However, a dismal showing in the Gujarat polls comes as a big jolt for the party as it risks ceding the space of opposition in the state to the Arvind Kejriwal-led AAP in a state which has been bi-party over the years.

It would also impact its bargaining power vis-a-vis other Opposition parties. Also, losing Gujarat badly could also add to the exodus of leaders that the party has been facing.

Asked about the results coming in, former Congress leader Sanjay Jha, who had also been a party spokesperson, said the Congress is paying a "spectacular price for its self-inflicted mammoth Punjab disaster where it gave away the state on a silver platter with golden ribbons to its nemesis, the AAP".

"Naturally an emboldened AAP sees Congress as a low-hanging fruit. That explains the dismal withering away in Gujarat and Delhi," he told PTI.

The decimation in Gujarat would not only have a bearing on the morale of the Congress and its workers that has been running high on the back a successful rollout of the Bharat Jodo Yatra, but also impact the party's ability to mobilise support and resources for future electoral battles.

Manindra Nath Thakur, who teaches political science at the Jawaharlal Nehru University, termed the Gujarat loss a "disaster" for the Congress and said it could lend credence to the argument that the AAP may replace or challenge the grand old party in bi-party states.

"The Congress faces more danger from the AAP going towards 2024. The BJP is in a comfortable position and the AAP could swing the anti-BJP vote towards it if Congress does not rework its strategy. The AAP can put up a challenge for the Congress next in Rajasthan and Madhya Pradesh also," he told PTI.

However, the prospect of a Himachal Pradesh win had given the leaders of the party something to cheer about. The party, currently in power on its own only in Rajasthan and Chhattisgarh, is likely to add one more state, albeit a small one, to its kitty.

The likely victory will also be significant for the party especially because its electoral clout in the north has been on a decline for more than a decade now.

The Himachal Pradesh comeback is a "huge morale booster" because it has been able to reclaim the state despite a massive BJP election machinery, Jha said.

This should give the Congress hope for both 2023 and 2024 albeit a lot will depend upon how it recharges the party after the Bharat Jodo Yatra concludes, he told PTI.

The results come a day after the Congress suffered yet another setback when results of civic body elections in Delhi came in on Wednesday, with the party finishing a distant third, winning only nine of the 250 wards in the Municipal Corporation of Delhi (MCD).

The MCD and Gujarat defeats and a confidence-boosting Himachal Pradesh performance had left the party with more questions than answers on the road to the 2024 general elections.

Its Opposition leadership still remains challenged by parties such as the AAP and the TMC, and the jury is still out whether the Bharat Jodo Yatra would pay electoral dividends or not.

A sterner test awaits the party with a slew of assembly polls next year including in Rajasthan, Madhya Pradesh, Chhattisgarh and Karnataka.

The road to 2024 is long and the journey appears to be getting difficult for the grand old party that has pinned its hopes on the Rahul Gandhi-led Bharat Jodo Yatra for a revival. Whether that will happen, only time will tell.