Nothing cooking at Ayodhya's food hub 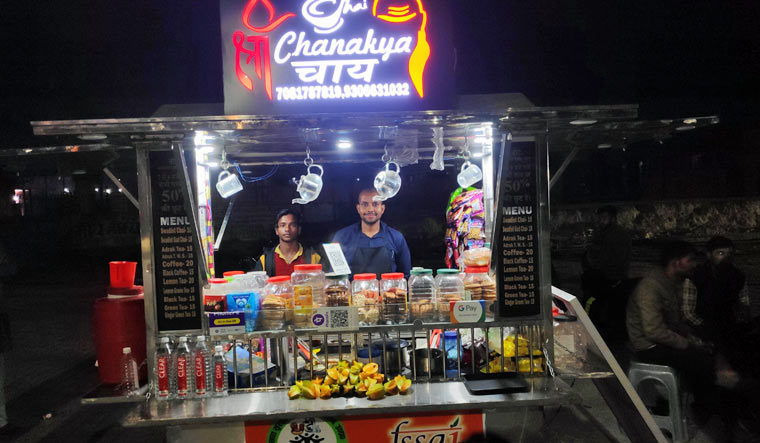 Sanjeet Maurya at his food cart

Among the many adjectives, the media used to describe it were ‘unique’ and ‘historical’, yet more than a week after it was inaugurated amidst fanfare, Ayodhya’s Food Hub remains non-functional.

On November 27, Uttar Pradesh Chief Minister Yogi Adityanath inaugurated the food hub, where 20 orange push carts, festooned with marigold flowers, stood against orange balloons. On the same visit, he had given a call for making Ayodhya the most beautiful city and assured that there was no paucity of funds for the same.

The food hub is adjacent to the Ram Katha Park in the Naya Ghat area.

It is part of the Clean Street Food Hub initiative of the Food Safety and Standards Authority of India (FSSAI) which aims to ‘raise the quality of street food vending to the level of food courts and established hotels and restaurants' so that street food vending in the country is revolutionised.

Undertaken in association with the local municipal corporation and the food and drugs administration department, Ayodhya’s food hub was touted as a one-stop destination for food from the North and the South, Chinese dishes, fast food, chaat, fruit drinks and the like.

The number of food carts at the hub is to be 32. As per the FSSAI guidelines, the minimum number required for a food cluster is 20.

On the day of the inauguration, the shutters of all carts had gone up, and pans sizzled with food while the vendors expressed their gratitude to the CM.

Manik Chand Singh, additional director of the food department said, “This is one place where people from all strata of society will come together to relish delicacies from around the country”.

There is ample parking area at the food hub.

However, only one food cart- that of Sanjeet Maurya is operational at the moment.

Maurya’s cart was not even part of the initiative and has been operational since November 7. He did not receive it under any government scheme. However, on the day of the inauguration, his cart was also made part of the hub, as it was clean and doing visible business. Called Shri Chanakya Chai, it serves tea, coffee, biscuits, bun butter and noodles.

Maurya is thankful that he got the opportunity to line up with the government-allotted carts as the municipal authorities had initially asked him to remove his cart from the area. “Now I have been told that if there is a further registration of carts or a new food hub, I shall also be considered”, he said.

While the other carts stand with their shutters downed, Maurya serves about 300 customers from 7 am to 11 pm. On Tuesdays, when a discount of 50 per cent is offered between 7 and 9 in the mornings and evenings, the number of customers goes up. Of Maurya's many teas and coffees, his ‘swadisht’ (tasty) tea, garnished with a secret blend of spices is the biggest hit. He is yet to recover the Rs 1.3 lakhs invested into the cart and supplies but is hopeful of getting there soon.

Maurya, who resigned from the Delhi Metro in October, has also appointed a helper. “I take care of all his living and food expenses, besides giving him a salary. Being my own boss is far better”, he said.

One of the other allottees said that he had been instructed to cook dosas and idlis at his stall but he did not know how to do so. “I had wanted to sell fruit chaat but my input was not considered”, he said, unwilling to be named. A few others too said that they did not know how to cook the dishes they have been instructed to. Another woe was that the rate list for dishes has not been decided, so, the vendors were unsure about making a profit.

An official at the municipal office said that the biggest challenge was the water supply to the hub and that still had to be sorted out.

Till that happens, it will just remain another project inaugurated in a rush for publicity.