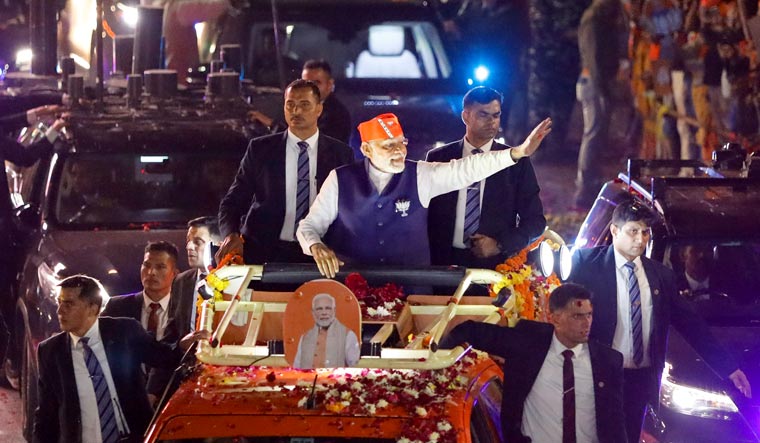 On Thursday, when the people of Gujarat voted in the first phase of assembly polls, Ahmedabad came to a standstill from late afternoon as Prime Minister Narendra Modi traversed through the city roads in a massive show of his strength and popularity.

Voting was held for 89 out of the 182 seats. No major untoward incident, except for faults in the EVMs at a couple of places, has been reported in these constituencies. The Election Commission has got complaints of bogus voting at 104 places.

The BJP is locked in a three-cornered contest with the opposition Congress and the Arvind Kejriwal-led Aam Aadmi Party.

Modi had begun his day by appealing to the voters, especially the first-time voters, to vote in large numbers. He then addressed public meetings at Kalol, Chhotaudepur and Himmatnagar.

His scheduled pushpanjali yatra began late by nearly two hours. But it began with a bang. He was welcomed at 35 places during his over 40 kilometer-long road show. He garlanded the statues of Sardar Vallabhbhai Patel, Netaji Subhashchandra Bose and Pandit Deendayal Upadhyay.

Wearing a BJP cap, Modi travelled in an open jeep. As the jeep decked with flowers moved at a slow pace from the eastern part of the city to the posh western part, there were people on either side of the roads to welcome him and turn the show into a photo opportunity.

As the sun set and darkness engulfed the roads, lights beamed from the jeep so that the prime minister can be seen by the people. People switched on flashlights of their mobile phones and showered petals on Modi, who was waving to the crowd. Except for his security personnel, nobody else was in the jeep.

His road show covered six assembly segments and such a rally by him is a first of its sorts. Even as the chief minister of Gujarat, he had not taken out such a big road show at one go.

Modi’s Thursday show is also aimed at infusing enthusiasm among the voters in the second phase of elections on December 5. The first phase has reported as much as up to 10 per cent less voting on several seats as compared to 2017, as per the preliminary figures trickling in.

Meanwhile, Kejriwal took part in a road show in the state and the Congress leaders also addressed public meetings. However, they were no match to the massive public support that the PM got. The response only got stronger towards the fag end of the road show.

The low voter turnout in the first phase as compared to 2017 has caused concerns among the political parties and it is more so because the campaign this time around was high pitched and a new party is also in fray.

Among known names whose fates have been sealed in the EVMs include Harsh Sanghvi, Purshottam Solanki, Kumar Kanani and Jitu Vaghani from the BJP; Arjun Modhwadia, Paresh Dhanani and Indranil Rajyaguru from the Congress, and Isudan Ghadvi, Alpesh Kathiriya and Gopal Italia from the AAP.