'Congress a closed chapter, people looking at AAP with a lot of hope' 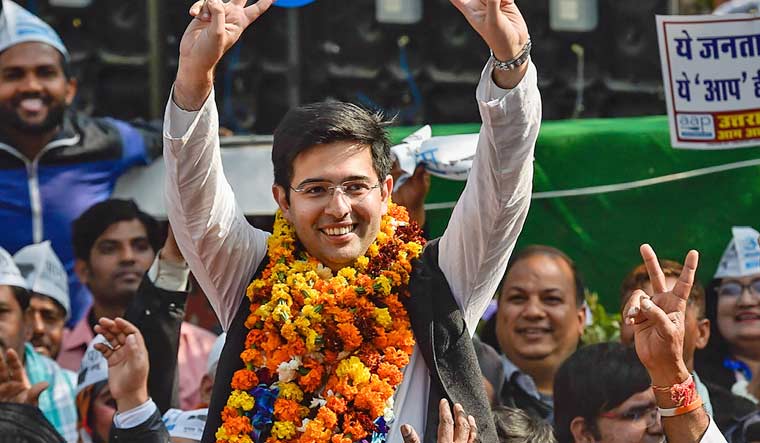 Soon after its victory in Punjab, Arvind Kejriwal-led Aam Aadmi Party has been campaigning aggressively in Gujarat. Not paying any heed to the fact that a third front has never succeeded in this central Indian state, the AAP has made it clear that it is serious about forming the government. In regions like South Gujarat, especially Surat, the support that the party is getting has caused flutters in the ruling BJP and the opposition Congress alike.

In an exclusive interview, AAP leader and Rajya Sabha Raghav Chadha, who is also the party's co-in-charge for Gujarat, talks to THE WEEK about what the party is expecting, the kind of support it is getting and much more.

Rallies and town halls by Arvind Kejriwal and other AAP leaders have been drawing huge crowds. How will you ensure that this is translated into votes for the party?

There is an overwhelming sense and desire for change and as a result people are looking at the AAP with a lot of hope. They now believe that the AAP is the only real alternative in the state. The unprecedented crowds that are coming to Kejriwal's rallies and the AAP events essentially reflect the growing disenchantment with the BJP and the quest for a change.

In the last one month, people have realized that this alternative also has the ability to form the government and the viability to actually uproot the BJP from the government. This viability is very important in the minds of the voter. A voter may like you, a voter may want you, but if he feels that you are not a viable alternative, he may still not vote for you.

In the last one month, this viability has been earned by the AAP and people now feel that the AAP is a viable alternative. It is the biggest thing that has happened. And therefore, with the viability coming into the picture, I feel all the crowds that you see either outside the rallies or on its premises are not only likely to vote for us but even going to campaign and seek votes for us.

In fact, at the end of my rallies, I just do not ask them to vote for us. I ask them to campaign for us whatever few days are remaining. Some may agree to go door to door for us, some may agree to phone their relatives and friends or some may even just forward our messages on social media.

The overwhelming sense that I get after addressing people is that everyone is not merely converted to an AAP voter, but they have become an AAP volunteer.

What is the basis on which Kejriwal says that the Congress won't even win five seats?

Congress has zero presence on the ground. They have no campaign, no strategy, no leader. They are leaderless, campaignless and desireless.

The AAP is a new party as compared to the BJP and the Congress. What ground support does the AAP have?

We have a robust organization now. For the past six to seven months, we have been working only on strengthening our organization down to every village, making it an organization that can give BJP a run for its money in Gujarat. That organization is the reason why we are getting so much crowd. This will be seen in our booth management also on the election day.

The Congress has alleged that the AAP is the "B" team of the BJP. How do you come out clear from this allegation?

How do you handle Narendra Modi's Hindutva, son of the soil or the victim card appeals towards the fag end of the campaigning?

Who are AAP's target voters?

What does the party do to rope in youngsters and intellectuals to come and vote for the party?

We did a lot of town halls with students, youngsters, young chartered accountants and young traders. We have done a whole outreach for the youngsters in the last six months. We have given a blueprint to them. We have given the employment guarantee, a meaningful employment, and till they have that, they will get Rs 3,000 per month as unemployment allowance.

Have you felt that some people have not turned up for the town halls or meetings due to fear of the ruling party?

In any new state, there is a tendency to under-represent the AAP's groundswell of support. Very often, surveys and political analysts have failed to capture it because there is a fear in the minds of the voters of the ruling party. That fear is let go of only on the last day when you cast your vote, because it is your private affair.

While there is a huge support, palpable support that we can see, there is far more that we can't see due to the fear that “BJP won't leave us if we say that we would support the AAP”. On camera nobody will speak, but everyone will vote.

Kejriwal has been saying that the AAP will form the government? How many seats would the party win?

We are inching ahead of the BJP. The BJP's vote share is down by at least 12 to 14 per cent as compared to 2017, as per our internal survey. The Congress will get less than five seats or a maximum of five seats. Rest is the AAP. It remains to be seen how the dip in the vote share reflects on the number of seats.

For every 10 voters, who openly say that they will vote for the AAP, six are previous BJP voters, three are those who have voted for the Congress and one is someone who cannot recollect his voting choice.

You began with a development plank. What was the need to play soft Hindutva card? Going to temples, promising free tours of Ramjanmabhoomi.

In Gujarat you have a hardcore Hindutva icon in Narendra Modi.

These are statements and phrases that sound good in editorials. People want quality electricity, education, water, and health.

The kind of promises that Kejriwal has given, will it be sustainable in the long run? Will it not have an adverse effect on the exchequers of the state?

The governments collect an insane amount of money from ordinary people in the form of taxes. Everything is taxed right from flour, curd to milk. It is your money. It goes to the government. You should be given back. We are only saying we will give you basic amenities to live a life of dignity. We are not saying we will give 5000 units of free electricity every month. India's Constitution says that India is a welfare state. These are welfare schemes. When the chief ministers and ministers get these free, why not the ordinary people? This is done across the world.