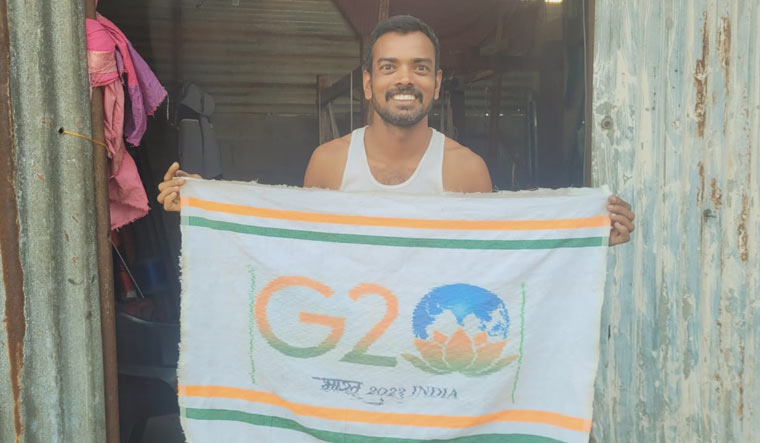 On Sunday morning, Veldhi Hari Prasad tuned into Mann Ki Baat like he always does. A few minutes into it, he was left shocked as the prime minister took his name. “It was unbelievable,” said Hari Prasad from his town Sircilla in northern Telangana. The 38-year-old weaver had gifted a cloth with G20 summit logo and a letter to Prime Minister Narendra Modi but hardly expected any credit.

Modi praised Hari Prasad for his skill and said that the weaver had grabbed everyone’s attention with his work. The PM also thanked him for the letter and summarised the contents of it for the listeners.

An ardent follower of PM Modi, Hari Prasad spoke about why this idea struck him. “When I heard in news that our country is going to host the next G20 summit, I felt very proud as an Indian. I feel under PM Modi, India’s importance has grown on the global stage and I wanted to do my bit to show gratitude to the PM.”

Hari Prasad spent three days to weave the colourful logo on a cloth made of woollen and cotton. The finished product measuring 24 x12 inches along with a heartfelt letter was handed over to a local BJP leader. “All along, I wasn’t sure if it had reached the PM’s office,” he said. According to Hari Prasad, he wasn’t intimated about his name figuring in the PM’s talk.

In the last 24 hours, Hari Prasad has been inundated with calls from friends, family and even strangers each congratulating him on making PM notice his work.

“This is a big recognition. I feel very fortunate,” he said. Hari Prasad’s family including his wife and daughter are rejoicing their fame.

Hari Prasad was felicitated by Telangana BJP state President Bandi Sanjay. Overwhelmed by the gesture, Hari Prasad assured him that he will work towards promoting the art. “I don’t belong to any particular political party. What I did was more out of admiration for Modi than supporting BJP,” he said.

Sircilla town is popular for handloom and powerloom weaving. In the past, weavers from this town had created micro sarees which could even fit into a matchbox. Hari Prasad also claims to have weaved such a saree a few years back.