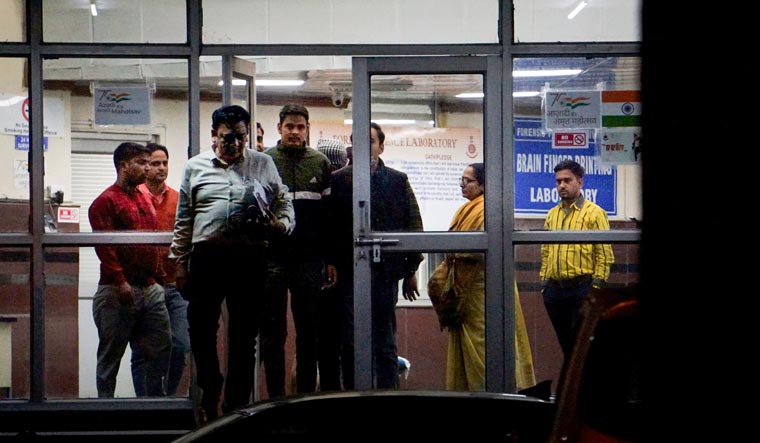 Aftab Amin Poonawala, the man accused of murdering and chopping up his live-in partner Shraddha Walkar, has been brought to the Forensic Science Laboratory (FSL) in Rohini for another round of polygraph tests.

The accused reached FSL at 9.50 am and the sessions began at around 11 am.

Meanwhile, there are unconfirmed reports that a drug peddler, said to be connected to Aftab, has been arrested from Surat by the Gujarat police. Faizal Momin stayed in the same locality as Aftab in Vasai West in Mumbai before the latter and Shraddha shifted to Delhi. Faisal and Aftab reportedly had many common friends and the investigating authorities are going through Aftab's call records to establish their connection.

Meanwhile, Aftab will be subjected to polygraph tests in the coming days. According to FSL Department of Crime Scene Management head Sanjeev Gupta, Aftab had health issues during the last session, following which the results were deemed "not satisfactory."

"The jail superintendent has received an order from the court that Poonawala should be presented before the Director of FSL Rohini on November 28, 29 and December 5. The third Battalion of Delhi Police will present him before the FSL Director," Tihar Jail CEO Dheeraj Mathur said.

Aftab has so far undergone three sessions of the test, including Thursday and Friday.

Aftab is reportedly kept in a separate cell and is under 24-hour CCTV monitoring at Tihar jail. His health check-up was done and there were no issues, added Mathur.

He has also shown extreme restraint and is calm inside the cell. He has been lodged with two petty criminals who have been asked to keep an eye on him.

The Delhi police have reportedly Tosh, a remote village in Himachal Pradesh, to probe whether Aftab had plotted to murder Shraddha during their stay there in April.

Aftab reportedly didn't make an entry in the register of the guesthouse where the two stayed, but Shraddha paid her share through UPI, thereby recording her presence in the guest house, according to The Times Of India.

Aftab is accused of strangling Walkar and chopping up her body into 35 pieces, which he kept in a 300-litre fridge for almost three weeks at his Mehrauli residence in South Delhi, before dumping them across the city over several days.

He was arrested on November 12 and sent to five-day police custody, which was further extended by five days on November 17.