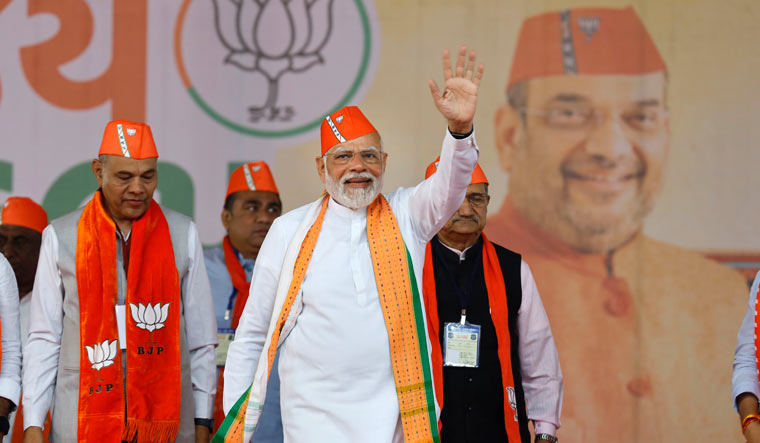 Remembering the 26/11 Mumbai terror strike, Prime Minister Narendra Modi on Sunday said Gujarat and the country need to be "alert" about Congress and like-minded parties which keep mum on "big terrorist attacks" to not offend their vote bank.

Addressing a rally in Kheda district in Gujarat where Assembly elections are scheduled for December 1 and 5, the prime minister said Congress and many like-minded parties view terrorism as a shortcut to achieving success.

"Terrorism is not over yet and the politics of the Congress has not also changed. The fear of terrorism will remain till appeasement politics continues.

Congress views terrorism from the prism of vote bank, Not only Congress but many like-minded parties have come up now who view terrorism as a shortcut to achieve success and this small party's hunger for power is even bigger, he said without naming the "small party".

The prime minister said the mouths of these parties remain "locked when big terrorist attacks take place so that their vote bank is not offended. They even go to courts from the back door to save terrorists".

When Batla House encounter took place, a Congress leader cried for terrorists. Gujarat and the country should remain alert from such parties, he added.

The 2008 encounter near Delhi resulted in the deaths of two terrorists hiding in a flat in the Batla House area in Okhla and a police officer.

Your one vote in 2014 (Lok Sabha elections) strengthened the fight against terrorism. Now forget about terror attacks in our cities, they (India's enemies) think 100 times before even conducting such attacks on our borders, the PM said, adding they know India will hit by entering their homes ("ghar main ghus ke marege").

In an apparent reference to Delhi Chief Minister Arvind Kejriwal, the PM said Congress and like-minded parties had raised doubts about surgical strikes and the ability of our armed forces.

Those countries which took terrorism lightly are in clutches of terrorism. Terrorism is not over yet. The politics of the Congress party has also not changed, while small parties are also indulging in vote bank politics, he said.

The PM said, "till the vote bank politics remains the fear of a resurgence of terrorism is also real.

We have to save Gujarat from those playing the dirty game of terrorism. This is a long fight and we need your support, Modi said.

He said the 2008 Mumbai terror attack was the "epitome of terrorist attacks in the country".

"I pray for the departed souls, the PM said, a day after tributes were paid to commemorate the 14th anniversary of the 26/11 strike unleashed by 10 Pakistani terrorists in which 166 people were killed and several injured.

Gujarat also faced serial blasts in Ahmedabad and Surat and many people had lost their lives, he said.

In Gujarat, we kept track of terrorist sleeper cells and arrested terrorists, the PM said referring to the action taken by the BJP government when he was the chief minister.

But instead of targeting terrorists, the (erstwhile) Congress government (UPA) was interested only in targeting Narendra Modi only, he said.

Attacking Congress president Mallikarjun Kharge who is campaigning in Gujarat on Sunday, Modi said Kharge had said he will show "Modi his aukat (status)".

Today Congress president is in Gujarat. He has been sent here by Soniaben (Sonia Gandhi). He came here and said he will show Modi his aukat. I have no status, I was born as a common man. Let us see how he shows me my aukat, the prime minister added.