A 17th century Ahom general is being resurrected by the government 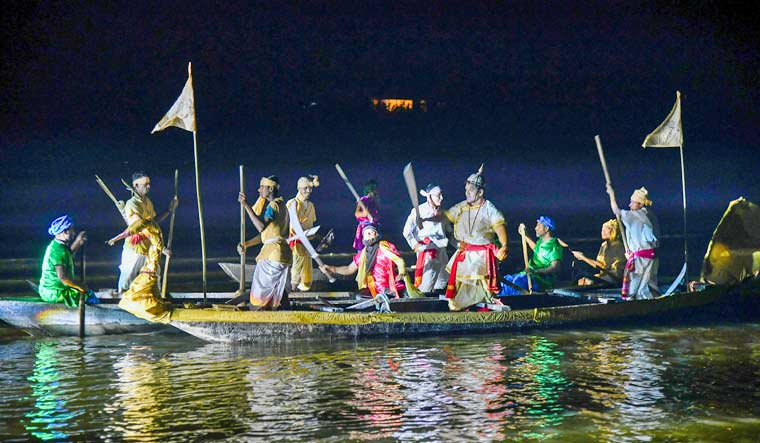 Tezpur: Artists, aboard a boat on the Brahmaputra river, enact a scene of war between Mughal and Ahom soldiers during the 400th birth anniversary celebrations of Ahom General Lachit Borphukan, in Tezpur, Monday, Nov. 21, 2022 | PTI

An eye-catching orange-hued hoarding in the national capital’s bus stops, Metro train coaches and other prime public spaces is arousing curiosity among Delhites and tourists.

The hoarding depicts a roaring warrior—Lachit Borphukan—in commanding action with his ‘hengdang’—a samurai sword-like machete used by Ahom soldiers in medieval Assam—along with his fellow soldiers in a war-like situation.

Not too many Indians know about Lachit.

Born on November 24, 1622, the ‘Borphukan’ (or commander-in-chief) died at the age of 50 but not after he destroyed the Mughal naval flotilla on the mighty Brahmaputra river at Saraighat in Guwahati.

Undisputed masters of almost the entire undivided India of that time, but plagued by a crisis of the ‘mansabdari’ and the ‘jagirdari’ system, the Mughals desperately needed more and more fertile land.

The most fertile stretch of land lay across the Brahmaputra Valley but it was under the control of the Ahoms who were well-known for their guerilla-fighting prowess.

Oral history says 17 attempts were made by the Mughals to wrest control of this fertile swath but to no avail.

While the wave of Mughal invasions began around 1641, the Battle of Saraighat of 1671 is very important in the sense that so overwhelming was the Ahom victory and so crippling was the effect on the Mughals that no further attempt was made to annex Assam.

While Lachit may have been accorded his long overdue recognition at the national level, another hero of the Battle of Saraighat—Atan Burhagohain—the Prime Minister of the Ahom kingdom, remains unsung.

A three-day celebration is being organized in the national capital from November 23-25 to mark the 400th birth anniversary of the warrior— known to a greater or lesser degree by only the Assamese and other Northeasterners.

With PM Narendra Modi, home minister Amit Shah, finance minister Nirmala Sitharaman, and law minister Kiren Rijiju in attendance among others, it is clear that a new hero is being acclaimed before the nation.

The reasons for the grand celebration are clear.

First, there is an assimilative aspect. Long regarded by most mainlanders to be on the fringes, the Northeast (NE) region is being accorded its rightful place in Indian history. An old complaint that the history of the NE was disregarded by the Indian historical narrative is sought to be addressed.

Reports are indicative that a move is afoot to finally include the glorious and uninterrupted rule of about 600-year-long reign of the Ahom dynasty in school history texts.

A feeling of alienation also contributed considerably to the number of insurgency movements that have raged in Assam and other NE states for decades.

Second, there is the effort at political appropriation. While Lachit Borphukan’s name is taken in the RSS’ ‘Pratah Smaran’ every day, this is the first grand effort to lay claim to his legacy as a ‘Hindu’ narrative.

A medieval-era general whose prime motive was to protect Assamese territory is currently depicted as one who held off against Muslim invaders. This may fetch political dividends to the Sangh Parivar.

The Hindu-Muslim sensitivity was definitely not dominant during Ahom rule. On the contrary, Mughal prisoners of war and Muslims who settled down in present-day Assam in those days are now totally assimilated into the Assamese core identity.

One of Lachit’s ablest commanders was Bagh Hazarika, a Muslim. On the other hand, the Mughal forces were led by Ram Singh, a Rajput.

Third, there is the Modi government’s flagship ‘Act East Policy’ (AEP) aspect. Most communities of NE India have ethnic, cultural and historical relations with the nations to the east.

For instance, the Ahoms are members of the Tai race. This race is spread in varying numbers across India, China, Thailand, Laos, Myanmar, Cambodia, Vietnam, Malaysia and Indonesia.

India’s AEP seeks to leverage NE’s close cultural and ethnic ties as a bridge to connect with the South-East Asian nations.

Among other things, India is keen to cement commercial relationships with the ASEAN to sell its increasing range of military hardware and equipment.

Interestingly, addressing the India-ASEAN Defence Ministers’ meeting at Cambodia’s Siem Reap on Tuesday, defence minister Rajnath Singh highlighted in his address the centrality of ASEAN in the Indo- Pacific region besides being the cornerstone of India’s AEP.