Nitish asked me to lead his party, I refused: Prashant Kishor 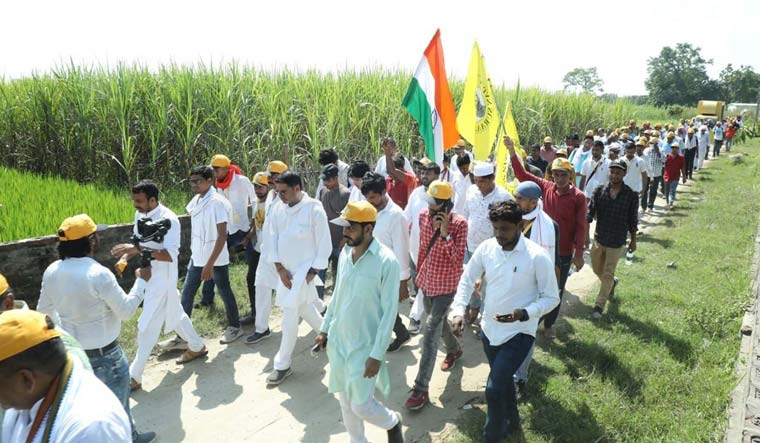 Political strategist-turned-activist Prashant Kishor on Tuesday launched a blistering attack on Bihar Chief Minister Nitish Kumar and claimed that he spurned a recent request by the latter to "lead" the Janata Dal (United).

Kishor, who is on a 3,500-km-long pada-yatra that would cover every nook and corner of the state, made the claim in a remote part of West Champaran district, about 275 km from Patna.

"Nitish Kumar has been able to hold on to his chair and thinks he is very smart (mukhyamanti banke bahut hoshiyar ban rahe hain')," said Kishor with uncharacteristic acerbity for a leader whom he has often called a father figure.

"After losing the 2014 (Lok Sabha) polls, he met me in Delhi, begging for help. I assisted him in winning the 2015 assembly polls as the chief ministerial candidate of the Mahagathbandhan'. Today, he has the temerity to offer gyan' (wisdom) to me, added Kishor.

The 45-year-old former national vice-president of JD(U) seems to have taken to heart Kumar's recent dismissive averment that Kishor did not know "A, B and C" of Bihar's politics, and the economy which he was promising to transform.

"I am the son of a doctor, trying to work in my home state after having proven my mettle across the country, the IPAC founder remarked, betraying indignation.

"You all must have learnt through media reports that Nitish Kumar had called me to his residence about 10-15 days back. He asked me to lead his party. I said it is not possible. I cannot go back on the commitment I have made in return for any post, said Kishor, who has launched a public awareness campaign called Jan Suraaj'.

Kishor was inducted into the JD(U) in 2018 by Kumar, who then headed the party, and got elevated to the national vice-president's post within a few weeks.

However, a squabble with Kumar over the Citizenship (Amendment) Act and the National Register of Citizens led to his expulsion from the party less than a couple of years later.

JD(U) leaders did not immediately react to the latest utterances of Kishor, which came on a day when festivities and a Patna High Court order throwing municipal elections into jeopardy held their attention.

However, Kishor's outbursts came just a day after JD(U) national president Rajiv Ranjan Singh alias Lalan had questioned the source of his funding.

Kishor also amply demonstrated that he was miffed, saying, "those wanting to know from where I am getting the money should know that unlike them, I have not indulged in dalaali' (brokerage)".

"Politicians have for long been seeking my advice on how to win elections. Media has been full of praise for my track record as a political strategist. But never before have I asked anybody to lend me money, he said.

"But today I am seeking donations. This is the fee that I am charging towards building this movement which entails expenses like the tent we have put up here," Kishor was heard as saying in the video footage shared on social media accounts of Jan Suraaj'.