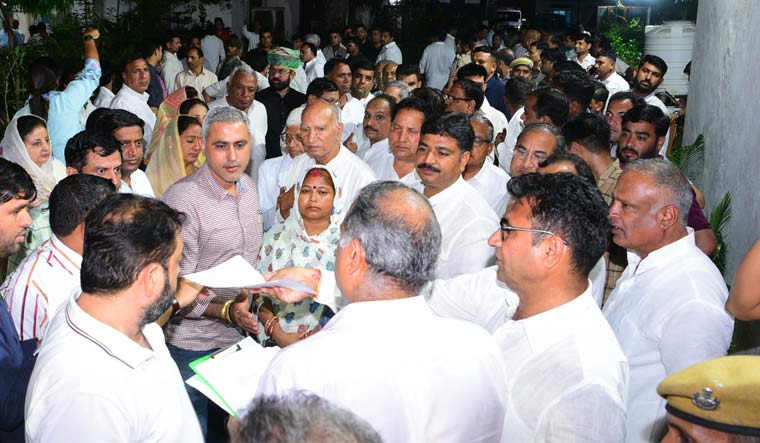 Congress MLAs, loyal to Ashok Gehlot, leave for the residence of Assembly Speaker C.P. Joshi for a meeting, in Jaipur on Sunday | PTI

Even as crisis deepens in Rajasthan Congress over the issue of leadership change, a key loyalist of Chief Minister Ashok Gehlot launched a scathing attack on party's state in-charge Ajay Maken on Monday, accusing him of canvassing for Sachin Pilot.

Shanti Dhariwal, a cabinet minister, alleged that Maken was talking to party MLAs in a partisan manner.

"My allegation against the general secretary and the state in-charge (Maken) is that he was talking to the MLAs here in a partisan manner. For many days, there were continuous reports that he used to ask for campaigning in favour of Sachin Pilot,” Dhariwal said.

He even alleged a conspiracy to remove Gehlot as the chief minister. "It was an 100 per cent conspiracy. I am not saying for others. I am accusing the general secretary only. There is no allegation on Kharge sahib. He is an honest and unbiased person," the minister said.

Dhariwal led the rebel group of MLAs who met at his residence on Sunday evening just before the scheduled Congress Legislature Party meeting and threatened to resign if Pilot was made the chief minister. The legislators even went to Speaker C.P. Joshi's residence to submit their resignation, pushing the party into another major crisis ahead of the president election.

"We are soldiers of Sonia Gandhi. I have not been accused of indiscipline even once in the last 50 years,” Dhariwal said. “If the party general secretary and in-charge has come up with a mission to make such people as the chief minister, then the MLAs were bound to be angry,” he further said, referring to Pilot's rebellion against the party in 2020.

"MLAs will not tolerate traitors being rewarded,” said the minister.

The CLP meeting was to be held at Gehlot's residence on Sunday evening, but was cancelled in the wake of fresh developments.  Party observers Maken and Mallikarjun Kharge Kharge, who were in Jaipur to attend the meeting, returned to Delhi on Monday and appraised party chief Sonia Gandhi about the developments.

The CLP meeting was called to elect Gehlot's successor as the veteran leader will have to resign from the CM post if he wins the Congress president poll, as per the party's 'one person one position' policy.

Meanwhile, according to reports, Gehlot has denied any role in Sunday's developments and even apologised to Kharge. “It should not have happened,” he reportedly said.

Gehlot and Pilot were at loggerheads for the chief minister's post soon after the Congress won the Assembly elections in December 2018. The high command then chose Gehlot as the chief minister for the third time while Pilot was made his deputy. In July 2020, Pilot along with 18 party MLAs rebelled against Gehlot's leadership.