JD(U) and RJD chiefs likely to approach other opposition leaders, too 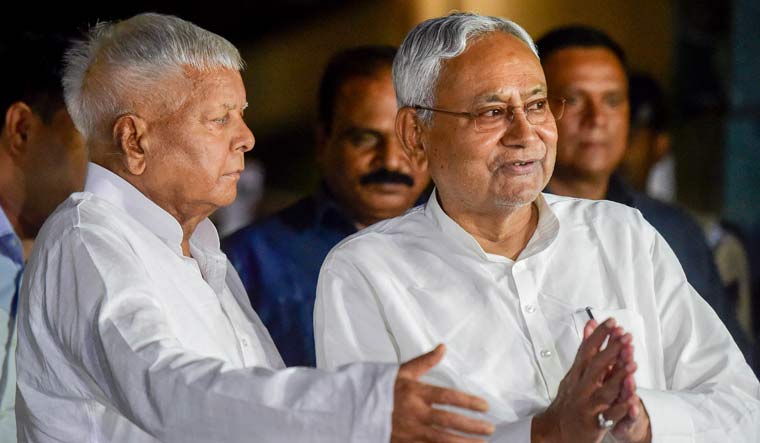 Bihar Chief Minister Nitish Kumar and RJD chief Lalu Prasad Yadav called on Congress interim president Sonia Gandhi at her residence at 10 Janpath in Delhi on Sunday. The three leaders are expected to have discussed the strategy to bring together all opposition parties together to form a formidable alliance against the BJP ahead of the 2025 Lok Sabha elections.

Notably, this was Kumar's first meeting with Sonia after he walked out of the BJP-led National Democratic Alliance and joined hands with the RJD and the Congress in Bihar. Nitish had met Rahul Gandhi during his last visit to the national capital earlier this month.

"All opposition parties are on the same page in the fight against the BJP and discussion on a concrete plan of action will happen later after the election for the post of Congress president," Nitish told reporters after the meeting.

The meeting is also seen as Lalu Prasad's first active political engagement in a long time. "We have to bring all opposition parties together to defeat the BJP. The Congress is in the process of electing its new president and Sonia Gandhi told us we will meet again after the election,” the RJD chief said.

Reports suggest that both Lalu and Nitish are likely to meet other opposition leaders, including those who are politically distant from the Congress party, in the coming days.

Earlier in the day, Nitish had called for uniting all opposition parties, including the Congress and the Left, to take on the BJP and said this "main front of opposition" will ensure that the saffron party loses badly in the 2024 general elections.

He had suggested that an opposition front cannot be envisaged without the Congress and the Left parties, and urged leaders on the dais, including some with a strong anti-Congress history, to work for a larger unity. He even asserted that the need of the hour is a main front of all opposition parties and not any third front, a reference to non-BJP and non-Congress parties.

NCP chief Sharad Pawar, who also has been spearheading the efforts to form an anti-BJP alliance, had earlier claimed that West Bengal Chief Minister and Trinamool Congress supremo Mamata Banerjee was ready to sink the difference with the Congress to form a united opposition front. He claimed that former Jammu and Kashmir CM Farooq Abdulla, too, were not averse to join hands with the Congress.