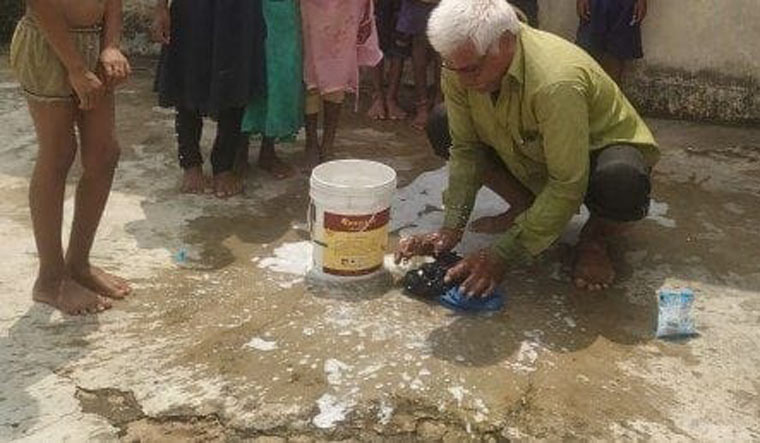 Shrawan Kumar Tripathi, a government school teacher, washing the uniform of a girl student after disrobing her.

An assistant teacher at a government school in Shahdol of Madhya Pradesh was suspended after he reportedly disrobed a girl student of class 5 for wearing an unclean uniform and went on to wash her dresses in front of other students.

The tribal girl, 10, was made to remain in semi-naked condition, only in her undergarment, for close to two hours until her uniform dried up.

Moreover, the teacher, Shrawan Kumar Tripathi shared photos and video of the incident on the departmental social media group, posturing himself to be a ‘cleanliness messenger’.

Assistant commissioner of tribal affairs department, Shahdol, Anand Rai Sinha confirmed to THE WEEK that the teacher has been suspended with immediate effect pending probe, keeping in view the sensitive nature of the issue.

Sinha said that the video and photo were prima facie enough evidence for the suspension. Block education officer Neelam Singh has been asked to conduct a probe into the matter and further action will be taken based on the report, Sinha said.

The incident happened at a government primary school run by the state tribal affairs department in a settlement in Paudi of Jaisinghnagar of Shahdol district. The girl had gone to the school in a soiled uniform and the teacher asked her to take it off. Then he got students to bring water and detergent powder and made all the students including the girl watch as he washed the uniform. Then he shared the photos and video in a departmental social media group, saying that it was a way to give a message of cleanliness to the students.

As the video and photos of the incident went viral, the villagers were enraged and demanded action against the teacher. They also alleged that earlier too, the teacher had been involved in controversial actions. Tripathi, however, maintained that he had done nothing wrong and was ready to face the probe against him, sources said.