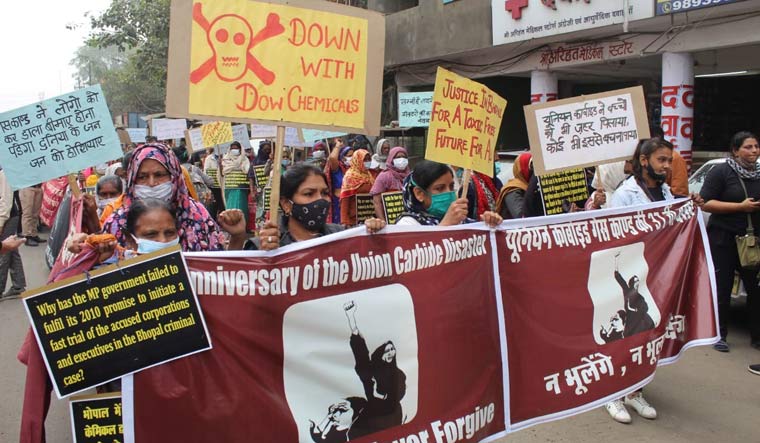 Ahead of the commencement of hearing on a long-pending curative petition seeking additional compensation for Bhopal gas tragedy survivors in the Supreme Court, organisations representing the survivors have called for correction of death and permanent injury figures so that adequate compensation is received.

The hearing is to commence on August 29.

These five survivors’ organisations have claimed—citing scientific and government documents and statements—that the number of deaths due to the gas tragedy of 1984 is more than 23,000 and not 5,295 as mentioned in the petition by the government.

They also cited scientific reports to claim that the majority of the 5.69 lakh affected persons sustained permanent injuries as a result of exposure to the deadly methyl iso-cyanate (MiC) gas, debunking the figures cited by the government that 5.21 lakh (93 per cent) sustained only temporary injuries.

The organisations welcomed the announcement of the date of commencement of the curative petition, filed by the Union government in December 2010, but expressed apprehension that the Bhopal survivors will be denied just compensation because of the government’s downplaying of deaths and extent of injuries.

The organisations, who are also petitioners in the curative petition, have said that in view of the higher figures of death and injuries, additional compensation of Rs 646 billion should be sought from the US corporations responsible for the tragedy and not Rs 96 billion as sought by the Union government.

The gas tragedy occurred due to leakage of deadly MiC from the Bhopal fertilizer plant of the Union Carbide India Limited, then owned by the US-based Union Carbide Company (UCC). The UCC has since been taken over by Dow Chemical Limited, a US multinational.

Rachna Dhingra of the Bhopal Group for Information and Action told THE WEEK at least four occasions in the last few years, ministers and officials of state and central governments have agreed that the figures of damage caused by the Bhopal disaster as presented in the curative petition were incorrect and promised to take steps to correct them. “The petition is to be heard soon and they are yet to make the corrections,” she said.

The organisations have said that if the state and central governments do not make the promised corrections in the curative petition before it is heard, they would be deliberately misleading the apex court making justice impossible. Collective action is needed to break the silence, they said.

Following are the scientific and official/court document evidences pointed out by the organisations to substantiate their claims:

Scientific facts that call for correction of figure of deaths

The figure of 5,295 provided by the Welfare Commissioner of Bhopal Gas Victims does not take into account the number of deaths that occurred after 1997. Data published by the MP government's Centre for Rehabilitation Studies shows that in 2000 alone there were 370 excess deaths in the gas-exposed population.

Indian Council of Medical Research (ICMR) Epidemiology Report (1984-1993) mentions 9,667 deaths attributable to disaster up to 1994. Statistical projection till 2009 provides a figure of 23,000 deaths

The criminal curative petition filed by the MP government in the Supreme Court states that as per the survey of state gas relief department, 15,248 people died as a result of the gas disaster

MP chief minister's letter to the prime minister  on January 8, 2012 states that 15,248 persons died as a result of the Bhopal disaster

The 1993 Plan of Action of the MP government states that 16,000 deaths have occurred and 5,000 women have been widowed as a result of the disaster.

The Union Carbide Safety Consideration Report of 1974 gives MiC gas a health hazard rating of 4. This means exposure to MiC will cause residual injury despite prompt treatment

According to National Library of Medicine, USA, exposure to MiC leads to Hyperglycaemia (Diabetes), Uraemia (Kidney diseases), Pulmonary fibrosis, Lung diseases & Acidosis all of which are chronic diseases

The 2003 annual report of MP state gas relief department states that 19 years after the disaster, the rate of pulmonary, gastro intestinal, eye and general problems were 3 to 5 times more in the gas exposed population compared to matched unexposed population

Annual Reports of the department from 1985 to 2010 consistently show that 70-80 per cent of the gas exposed population were visiting the state government run gas relief hospitals for their chronic problems decades after their toxic exposure.

Official documents that call for correction of figure of injuries