Thousands of farmers gather in Delhi for 'mahapanchayat', cause huge traffic snarls

The day-long 'mahapanchayat' was organised by Samyukta Kisan Morcha 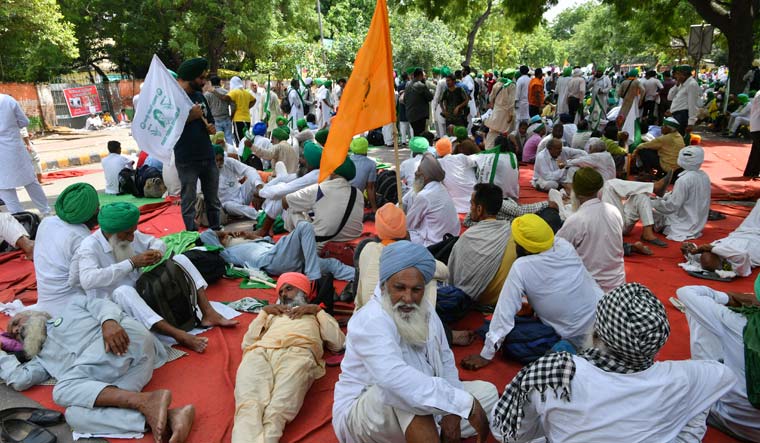 Farmers from Punjab, Haryana and other places holding a 'mahapanchayat' at Jantar Mantar in Delhi | PTI

More than eight months since their year-long protest at Delhi's borders ended, farmers from various states gathered in the national capital in large numbers on Monday to take part in a "mahapanchayat", causing massive traffic snarls, especially at the city's entry points, including Singhu and Ghazipur.

During the daylong "mahapanchayat" organised by the Samyukta Kisan Morcha (Non-Political) at Jantar Mantar, the farmers carrying the flags of their unions raised slogans against the BJP-led Centre for "not fulfilling" its promises.

They also demanded the arrest of Union minister Ajay Mishra, who they said was responsible for the "massacre of farmers" in Lakhimpur Kheri district of Uttar Pradesh.

In view of the "mahapanchayat", police put up layers of barricades at Delhi's borders to check the vehicles entering the capital, causing long queues of vehicles at the Ghazipur and Singhu borders.

This was part of the security arrangements put in place in view of the "mahapanchayat", a senior police officer said.

Massive traffic snarls were witnessed on the roads leading to the borders, including the Karnal road and roads in Libas Pur, Samaypur Badli and Narela.

Later in the day, the farmers submitted a memorandum containing their six-point demands to President Droupadi Murmu and Prime Minister Narendra Modi. They said a meeting of the SKM (NP) will be held on Tuesday to decide the future course of action.

SKM (Non-Political) leaders claimed that at some locations, farmers were stopped from reaching Jantar Mantar. However, the Delhi Police denied the claim.

"In the mahapanchayat, we deliberated on our nine-point demand letter. This included a legal guarantee on the minimum support price (MSP) for crops and the cancellation of the Electricity (Amendment) Bill, 2022 among others," said Abhimanyu Singh Kohar, an SKM (NP) member and one of the organisers of the "mahapanchayat".

This was the first large gathering of farmers in and around the national capital since thousands of them ended their year-long agitation at Delhi's borders following a repeal of three contentious farm laws by the Centre.

"The mahapanchayat has ended and now, we will convene a meeting at the Rakabganj Gurdwara to decide our future strategy," Kohar said.

The SKM (NP) is a breakaway group of the Samyukta Kisan Morcha (SKM) that had spearheaded the year-long protest at Delhi's borders against the three farm laws.

In the memorandum, the farmers said a law guaranteeing the MSP on crops should be passed in Parliament, the government should write off farm loans to prevent farmer suicides and should consult farmers on the Electricity (Amendment) bill 2022 before passing it.

Apart from the Ghazipur, Singhu and Tikri borders, key stretches on the Delhi-Meerut Expressway, the Palam flyover, Aurobindo Marg, Ring Road (near Indraprastha Park), the Ghaziabad-Wazirabad road and the Munirka road, among other roads, witnessed traffic snarls.

Other than Punjab, Haryana and Uttar Pradesh, farmers from Karnataka, Maharashtra, Odisha and Kerala, among other states, arrived in Delhi to take part in the "mahapanchayat".

Many of them came with their bags packed and with an intent to stay put. Carrying flags and wearing caps given by farmer leaders, they were seen sitting in and around Janpath.

They raised slogans for farmer unity and against the Centre for "not fulfilling" its promises.

Magha Nibori, a farmer from Punjab with one acre of farmland on which he cultivates seasonal crops, said he came to Delhi fully prepared to stay put, if required.

"We are poor farmers. Nobody is helping us. Nothing is being done for us. We participated in last year's (anti-farm laws) protest as well. The government had assured us that it will listen to our demands but nothing is being done. We will not hesitate to camp here, if required, to get our demands addressed," Nibori told PTI.

The heavy security measures led to massive traffic snarls across the city. Police also put up cemented barricades to avoid any untoward incident.

The traffic police informed the commuters about the traffic situation and advised them to plan their journeys accordingly.

"In view of a heightened security scenario and threat perception, some persons or protestors were stopped at the Ghazipur border. However, after due verifications, all of them were allowed to proceed to their respective destinations," Deputy Commissioner of Police (East) Priyanka Kashyap said.

Farmer leader Rakesh Tikait was detained by the Delhi Police at the Ghazipur border on Sunday while he was trying to enter the capital to take part in a protest against unemployment at Jantar Mantar.