'I am the shadow chief minister, treat me well': Siddaramaiah warns cops after egg attack

Slams BJP govt, cops for their "inability" to rein in the protesters 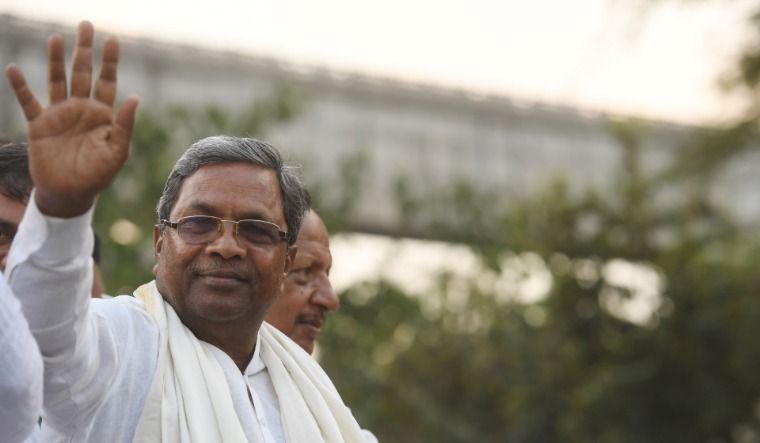 Nine persons were arrested by the Kushalanagar police on Friday for allegedly throwing eggs at the Leader of Opposition in Karnataka Legislative Assembly and former chief minister Siddaramaiah’s car. The arrested persons - Manu, Krishnappa, Manjunatha, Nityananda, Praveena, Gautham, Bhaskara Naik, Manikantha and Lakshmi Narayan—who were produced before the JMFC court have been released on bail.

The right-wing activists were apparently angry over Siddaramaiah's recent remarks on V.D. Savarkar during his tour to Kodagu district to meet the flood victims. The protesters had gheraoed the car in which Siddaramaiah was traveling, flaunted black flags and threw eggs at the vehicle.

The BJP youth wing members had started a social media campaign against Siddaramaiah with "Go back Siddu Khan, the disciple of Tipu Sultan who carried out genocide in Kodagu" slogans going viral. The police resorted to lathicharge to disperse the crowd at Guddehosur near Kodagu border.

Siddaramaiah, during his speech, had asked the Hindutva activists why they had to put up Savarkar’s photograph in a "Muslim area" in Shivamogga, after a communal clash had broken out in the area over installing Savarkar's flex at Ameer Ahmed circle on August 15. In the aftermath of the clash, a youth, Prem Singh, was stabbed in the Gandhi Bazar area of the city.

The senior Congress leader drew flak for his statement from the BJP, which wanted to know if the "Muslim area" that Siddaramaiah was referring to was in Pakistan.

On Friday, Siddaramaiah slammed the ruling BJP and the cops for their "inability" to rein in the protesters. "The BJP would not continue to be in power for ever. In the next 6-7 months we will come to power. We will win both the seats in Kodagu. The police should diligently do their duty without taking sides. This was a state-sponsored protest," said the CLP leader.

A furious Siddaramaiah, while addressing a crowd of Congress supporters in Kodagu on Thursday also said that he would be back in Kodagu on August 26 and called upon his partyworkers to join him to gherao the SP's office for the failure of law and order in the district. "I am the leader of the opposition, the shadow chief minister of the state," Siddaramaiah reminded the cops.

Meanwhile, the Karnataka Congress is holding a protest at Freedom Park in Bengaluru to condemn the egg attack against their leader, even as Hindutva activists continued to flaunt black flags at the CLP leader in Chikmagaluru, for the second day.