'Five resolves for next 25 years': PM Modi's address to nation

India is the mother of democracy, said PM Modi 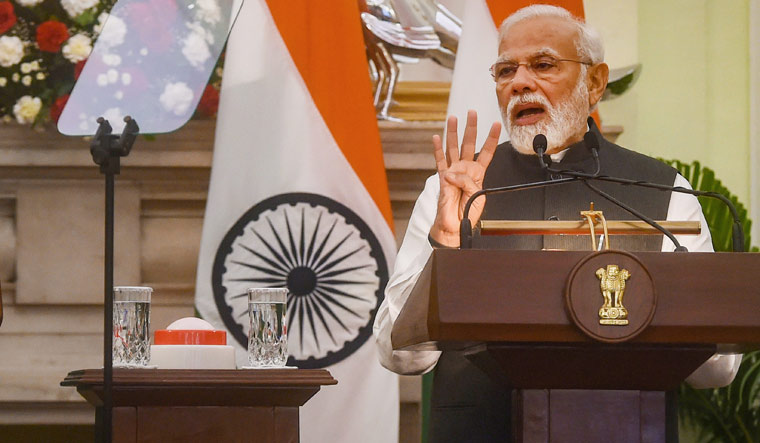 On Independence Day, Prime Minister Narendra Modi inspected the guard of honour and hoisted the national flag at the Red Fort. He cited Mahatma Gandhi, Netaji Subhash Chandra Bose, Babasaheb Ambedkar and Veer Savarkar as the pathblazers leading India's fight. "India is the mother of democracy. India has proved that it has a precious ability, and faced many challenges during its journey of 75 years," he said.

Modi called for youngsters to dedicate the next 25 years of their lives for the development of the nation. "For the next 25 years, we need to focus on the five resolves—Viksit Bharat (developed nation); removing every ounce of servitude in us; pride for our glorious heritage; unity; fulfilling our duties," he said.

"This nation is thankful to Mangal Pandey, Tatya Tope, Bhagat Singh, Sukhdev, Rajguru, Chandrashekhar Azad, Ashfaqulla Khan, Ram Prasad Bismil and our innumerable revolutionaries who shook the foundation of the British rule. Every India is filled with pride when they remember the strength of the women of India—be it Rani Laxmibai, Jhalkari Bai, Chennamma, Begum Hazrat Mahal," Modi said.

He also cited Jawaharlal Nehru as one of the most prominent nation builders. "Be it those who fought for independence or built the nation—Dr Rajendra Prasad, Nehru ji, Sardar Patel, S.P. Mookerjee, L.B. Shastri, Deendayal Upadhyaya, J.P. Narayan, R.M. Lohia, Vinoba Bhave, Nanaji Deshmukh, Subramania Bharati—it is the day to bow before such great personalities," he said.

Security cover has been beefed up across the national capital and forces are on high alert to thwart any untoward incident as police have intensified patrolling and deployed extra pickets at vital installations based on intelligence inputs received via central agencies.

From facial recognition system (FRS) cameras installed at the entry point of the Red Fort to multi-layered security cover and deployment of over 400 kite catchers and fliers on rooftops and other sensitive locations in the fort area to counter any threats from sub-conventional aerial platforms, the area has been completely secured, a senior police official said.

Borders have also been sealed to ensure no untoward incident takes place in the national capital and strict action will be taken against anyone who tries to disrupt the law and order situation, the police official said.

The multi-layered security ring, including NSG snipers, elite SWAT commandos, kite catchers, canine units and sharpshooters on high-rise buildings, has been placed around the Mughal-era fort, and adherence to social distancing norms will be must like last year due to the Covid pandemic.

The police had on July 22 issued an order prohibiting the flying of aerial objects such as paragliders, hang gliders and hot air balloons, and this will remain in force till August 16.

Around 1,000 high-specification cameras have been installed in the North, Central and New Delhi district units to contain aerial objects. These cameras will also help monitor the VVIP route to the monument.