Not scared of ED and CBI, asserts JD(U) after dumping BJP 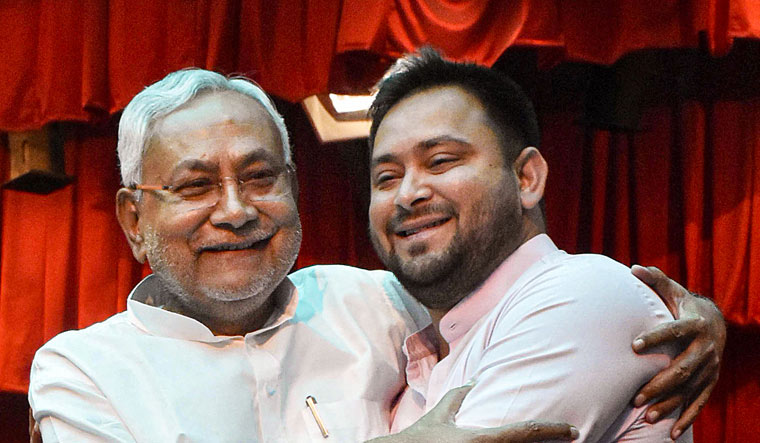 Bihar Chief Minister Nitish Kumar's JD(U) on Wednesday asserted that it was not scared of ED and CBI following its break-up with the BJP, which rules the Centre and is often accused by the opposition of misusing investigating agencies.

JD(U) national president Rajiv Ranjan Singh alias Lalan, who addressed a press conference here to reply to the BJP's charge of betrayal, accused the former ally of having deceived the coalition dharma by weaning away our MLAs in Arunachal Pradesh, who were already supporting their government.

Lalan also mocked former deputy chief minister Sushil Kumar Modi for claiming that Kumar got miffed over not being considered for the vice president's post.

He has been shunted by the BJP as a punishment for the close relations he shared with Nitish Kumar. May such antics bring him some degree of political rehabilitation, Lalan said.

Modi had made the allegation at a press conference earlier in the day. Besides the JD(U), he drew flak from the RJD which has now become part of the new ruling coalition.

Sushil Kumar Modi had alleged police assault when Lalu Prasad was the CM. He got himself bandaged but when Lalu challenged him to show his wounds he never agreed because that would have exposed him. He is a habitual liar, alleged RJD national vice president Shivanand Tiwary who has known Modi, Kumar and Prasad since the 1970s.

To a question on Kumar having said that had Sushil Kumar Modi been around, things would not have come to such a pass between JD(U) and BJP, Lalan said: It is true that old timers are being side-lined in the party so that the ideals espoused by Atal Bihari Vajpayee, L K Advani and Murli Manohar Joshi could be buried. Many state leaders of that period have been replaced with those who can ride on other people's toes.

Lalan was also asked whether parting ways with the BJP would make the JD(U) vulnerable to alleged political vendetta through probe agencies.

Let them unleash the agencies. We are not afraid of the CBI and ED. Only those who run companies need to live in fear. We depend on the salary we draw as MPs or MLAs besides other legal sources of personal income for survival, replied the Lok Sabha member.

He also said the party's decision to snap ties with the BJP was supported by all, including those who could not attend yesterday's meeting, like Rajya Sabha Deputy Chairman Harivansh who spoke to me over the telephone to convey that he will always back Nitish Kumar.

The JD(U) chief accused the BJP of having used the LJP, then headed by Chirag Paswan, to field its own rebels against our candidates in the last assembly polls.

Lalan also reiterated the allegation that former JD(U) president RCP Singh had become the BJP's agent. However, when asked whether the ex-Union minister tried to split the party, he asserted: Nobody can cause fissures in our ranks.

They (BJP) accuse us of betraying the mandate. Why did they agree to join Nitish Kumar's government in 2017? He had won the assembly polls as the Grand Alliance's Chief Ministerial candidate. They better not talk about coalition dharma after what they did to us in Arunachal, he fumed.

The BJP will face an uphill task in 2024 Lok Sabha polls. More than 30 of their MPs are from adjoining states of Bihar and West Bengal where they may draw a blank and lose majority which will sound the death knell for the tanashahi (dictatorship), said the JD(U) chief.

He also reminded the BJP that it could win only 53 seats in the 2015 assembly polls when Prime Minister Narendra Modi had himself held a record number of 42 rallies.