Videos of the incident surfaced on social media 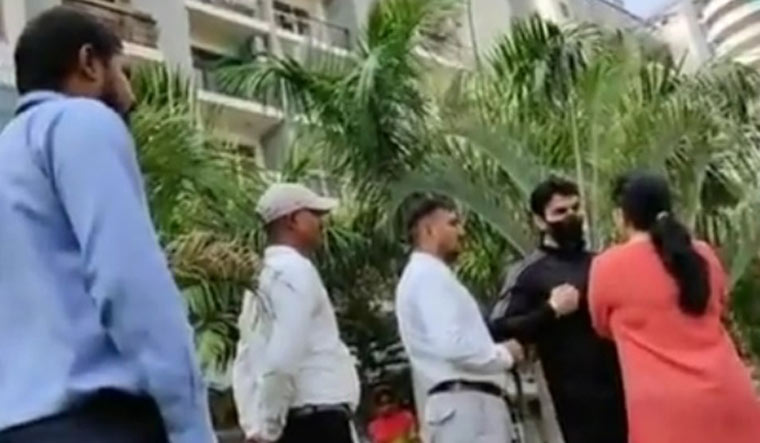 A BJP politician in Uttar Pradesh was booked by the Noida Police on Friday for allegedly assaulting a woman after a spat with her inside a housing society.

The spat took place during the day at the Grand Omaxe society in Sector-93B in Noida when the woman objected to plantation of some trees by Shrikant Tyagi, citing violation of rules even as he claimed he was within his rights to do so.

Multiple videos of the episode surfaced on social media, with one purportedly showing Tyagi hurling expletives and assaulting the woman. He also hurled abusive words for her husband and made derogatory remarks about her.

"Shrikant Tyagi has been booked under Indian Penal Code section 354 (assault or use of criminal force on any woman, intending to outrage or knowing it to be likely that he will thereby outrage her modesty)," Additional Deputy Commissioner of Police (Women Safety) Ankita Sharma told PTI.

"The charges maybe added after due investigation into the case," the IPS officer said.

Tyagi identifies himself on social media as a national executive member of the BJP's Kisan Morcha and national co-cordinator of the Yuva Kisan Samiti of the ruling party.

According to officials, a local police team was sent to the housing society in the evening but Tyagi did not open the doors of his house.

"He was threatening to unleash his pet dogs on the police officials, which was preventing his arrest. The police team was waiting outside his house," another official told PTI.

While Tyagi could not be immediately contacted for his response, a local BJP office-bearer said he is not associated with the Noida unit of the party and holds no post here.

"His work area is Ghaziabad and he only lives here in this society," the BJP office-bearer said, requesting anonymity.

Further legal proceedings in the case are on, the police said.