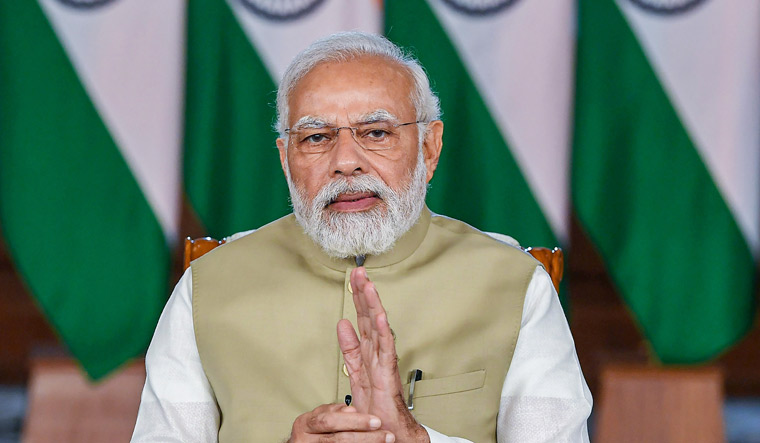 Prime Minister Narendra Modi on Monday accused the opposition of obstructing development works merely on the ground that they could not accomplish these during their tenure while alleging that they keep their political interests above that of society and the country.

"Many times, the opposition parties put some obstacles in the government's work as they could not implement the decisions taken by them when they were in power," Modi said addressing virtually a programme on the 10th death anniversary of former Samajwadi Party Rajya Sabha member Harmohan Singh Yadav.

"Now, if they (decisions) are implemented, they oppose it. People of the country don't like it."

"Parties exist because of democracy and democracy exists because of the country. Most parties in our country, especially all non-Congress parties, have followed this idea," he said.

The prime minister said when the country's democracy was crushed during the Emergency, all major parties came together to save the Constitution.

"Chaudhary Harmohan Singh Yadav was also a 'jujharu sainik' (combative soldier) of that struggle. In other words, the interests of our country and that of society are bigger than our ideologies," he stressed.

"However, in recent times, there has been a trend to put ideology and political interests above the interests of the country and that of society."

Speaking on social justice, Modi said every section of society should get equal opportunities.

"No one should be deprived of the basic needs. The country will move forward when the Dalits, backwards, tribals, women and divyang move ahead. Harmohanji considered education as the most important for this transformation," he said.

Hailing Yadav, Modi said he not only took a political stand against the massacre of the Sikhs in 1984 but also came forward to save them.

He risked his life and saved the lives of many Sikh families, Modi said, adding that the country recognised his leadership and awarded him the Shaurya Chakra for it.

"The work which he has done for society and his contribution to the politics of UP and the country will guide coming generations."

The prime minister said Lohia worked on the cultural strength of the country by organising Ramayana fairs and caring for the Ganga.

"Lohiaji was of the view that socialism is a principle of equality. He used to alert (people) that the decline of socialism may convert it into inequality. In India, we have seen both these situations," he said.

Modi said India is realising Lohia's dreams by initiatives like the Namami Gange, Beti Bachao, Beti Padhao, Eklavya Schools for tribal areas and the promotion of education in mother tongue.

Drawing attention to the swearing-in of Droupadi Murmu as the country's new President, Modi said, "For the first time after Independence, a woman from tribal society is going to lead the country.

"This is a living example of the strength of our democracy and the ideology of 'sarva samaveshi' (touching everyone)," he said.

Born on October 18, 1921, Harmohan Singh Yadav was a towering leader of his community.

He remained active in politics for a long time and served in various capacities as an MLC, MLA, member of the Rajya Sabha and the chairman of the Akhil Bhartiya Yadav Mahasabha.

He was also instrumental in establishing many educational institutions in and around Kanpur with the help of his son Sukhram Singh.

The PM attending his death anniversary programme is being seen in political circles as part of the BJP's outreach to numerically strong Yadavs, the core vote bank of the Samajwadi Party led by Akhilesh Yadav.

The veteran leader's grandson Mohit Yadav has already joined the BJP and his father Sukhram Yadav denied renomination by the SP in the upper house. He also met Chief Minister Yogi Adityanath.