Focus on surveillance, WGS for possible mutation: Mandaviya to officials amid surge in Covid cases

Mandaviya chaired a meeting with key experts and officials 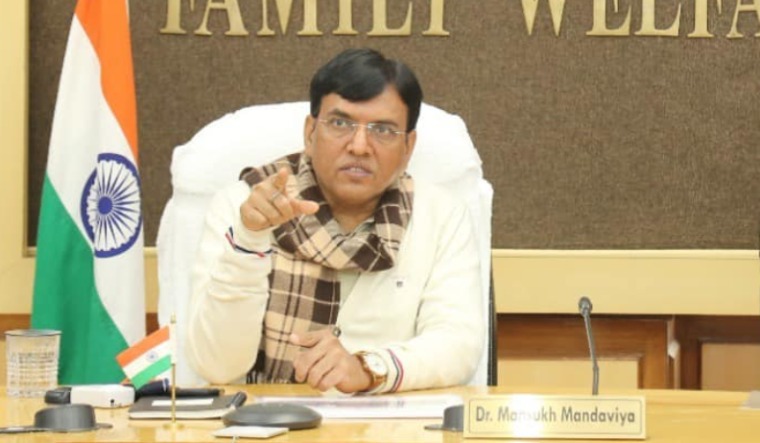 Union Health Minister Mansukh Mandaviya on Thursday directed officials to continue to focus on surveillance and whole genome sequencing to scan any possible mutations while stressing on adequate testing and effective monitoring to assess the spread of COVID-19 in a timely manner.

Mandaviya, who chaired a meeting with key experts and officials amid an upsurge of COVID-19 cases in some states, stressed the need to focus on districts reporting high case positivity and undertake adequate testing (with higher proportion of RT-PCR) and effective surveillance to assess and control the spread of the infection in a timely manner, the Union Health ministry said in a statement.

The minister directed officials to continue to focus on surveillance and on whole genome sequencing (WGS) to scan for any possible mutation, it said.

He also directed officials to monitor hospitalizations due to COVID-19, and SARI/ILI cases, the statement stated.

He exhorted them to increase the pace of vaccination, including booster doses, in districts reporting high cases.

"As there is adequate vaccine doses available, let there be no vaccine wastage while focusing on accelerating vaccination among the eligible and vulnerable groups," he said.

Fifty-one districts in the country, including 12 from Kerala, seven from Mizoram and five each from Maharashtra and Assam, are reporting a weekly Covid positivity rate of over 10 per cent while in 53 districts, including 11 from Rajasthan and five from Delhi, the weekly positivity is between 5 and 10 per cent, official sources said.

Besides, 355 districts, including 42 from Maharashtra, 33 from Assam and 31 from Rajasthan, have been reporting less than 140 Daily Tests per Million, they said.

The Omicron BA.2 sub-variant has been found in over 83 per cent of the samples which were genome sequenced in May and June, according to an analysis by the Indian SARS-CoV-2 Genomics Consortium (INSACOG), official sources said on Thursday.

Omicron and its micro-lineages has been the dominant circulating variant in India from January 2022. In May, the proportion of Omicron sublineages BA.2.12.2, BA.1.1.529, BA.3, BA.4, BA.5 increased, an official said.

In the meeting, Health ministry joint secretary Lav Agarwal made a detailed presentation on the global scenario of surge in cases and status of COVID-19 in the country, the statement said.

This included presentation and analysis of the trend of Covid cases, daily and active cases, positivity and deaths, testing status along with state-wise weekly tests per million, RT-PCR share in weekly tests, genome sequencing and vaccination status, it added.