Rajasthan CM Gehlot leads Congress from the front in its satyagraha

Gehlot was in Delhi from June 13 to 15, coordinating street protests 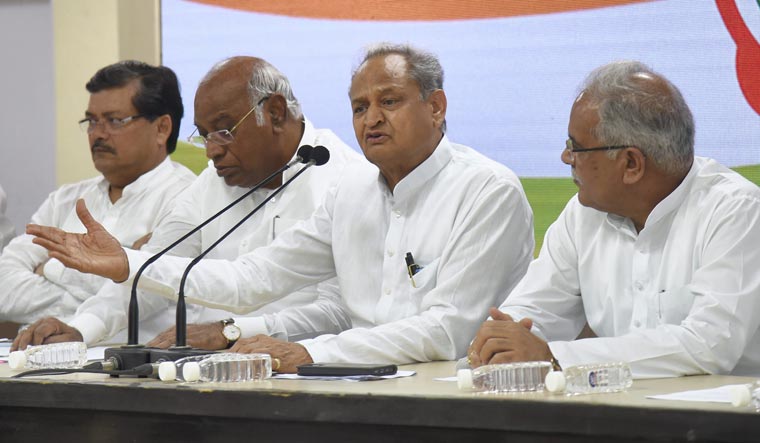 As the Congress erupted in protest against the Enforcement Directorate's summonses to its leaders Sonia Gandhi and Rahul Gandhi, Rajasthan Chief Minister Ashok Gehlot has emerged as the leading face of the agitation, playing an important role in crafting the 'satyagraha' and lending gravitas to the party's aggressive stance against the Narendra Modi government.

Gehlot was in Delhi from June 13 to 15, coordinating the street protests and articulating his party's views on the developments, as Rahul was questioned by the ED. The mild mannered 70-year-old leader was detained by Delhi Police as he attempted to march with Rahul to the ED on June 13.

The chief minister was back in Delhi on June 19, a day ahead of the resumption of Rahul's questioning by the ED. He is understood to be one of the key persons helming the protest and crafting the party's strategy against what it sees as a direct attack on its leadership. Along with Gehlot, his cabinet colleagues and office-bearers of the state unit were present in Delhi and a large number of party workers from Rajasthan were mobilised to add numbers to the agitation in the national capital.

The CBI's raids on June 17 at multiple locations in a case in which Gehlot's elder brother Agrasen Gehlot is an accused was described by his party as a clear case of political vendetta, given that the chief minister was playing a lead role in the Congress' fightback against the alleged attempts by the Modi government to target the party's top leadership.

Gehlot's role in the Congress' aggressive stance as regards the ED questioning is being seen as an affirmation of the veteran leader's importance in the party in the current scheme of things and his growing significance as a leader the Gandhis are turning to in difficult times for them and for the party.

In the backdrop of former deputy chief minister Sachin Pilot snapping at his heels and demanding a change at the helm in the state, Gehlot's success in fending off a stiff challenge from the BJP in the recent Rajya Sabha elections is seen as having strengthened his position. With media baron Subhash Chandra queering the pitch for the Congress by entering the arena an independent candidate backed by the BJP, it was up to Gehlot to ensure that the MLAs supporting his government did not stray.

He personally reached out to the legislators who were said to be upset and kept the MLAs who were corralled at a hotel in Udaipur in good humour. In the end, he succeeded in ensuring the victory of the party's three candidates Randeep Singh Surjewala, Mukul Wasnik and Pramod Tiwari.

Especially since the results of the Punjab assembly polls, there have been demands from Pilot's supporters that now is the time to bring about a generational change in the party in the state. Had he faltered, Gehlot would have faced more vociferous demands for a change at the helm.

Gehlot's survival instincts had held him in good stead in July 2020 when he had overcome a rebellion from Pilot, and later, he made a conscious effort to emerge as the Congress' main voice critiquing the decisions and policies of the Modi government.

It was a major change for Gehlot, who would earlier insist on keeping a low profile, as he shot off letters to the prime minister over issues ranging from the impact of COVID-19 to GST.

Within the party, in the aftermath of the demise of Ahmed Patel, who was the main troubleshooter for the Gandhis, he emerged as the main defender of the Congress' first family, especially in the wake of the criticisms of the so-called 'Group of 23' leaders.

Gehlot derives his importance as much for being the chief minister of one of the only two states where the party is in power, as for being one of the most experienced leaders in the party.