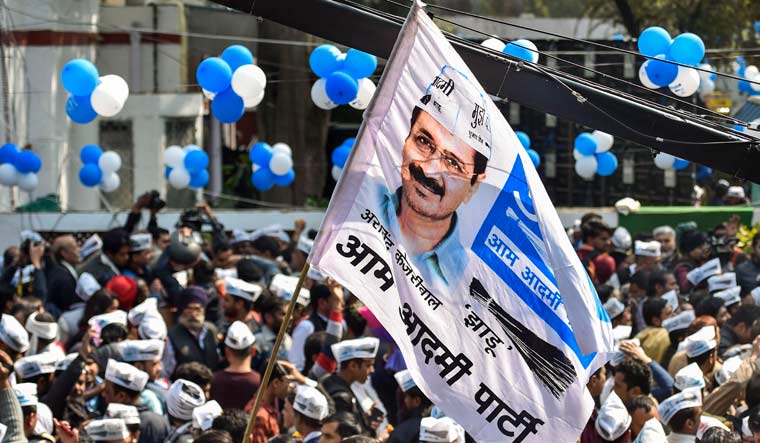 Days after dissolving its organisational structure in Gujarat, the Aam Aadmi Party (AAP) on Sunday announced the list of its new office-bearers in the restructured unit, and said it is ready for a direct fight with the ruling BJP in the Assembly elections due in December this year.

The Aam Aadmi Party had on Wednesday said its Gujarat organisational structure was dissolved to restructure the party unit with an aim to defeat the BJP, which has been in power in the state for over two decades.

Pathak said the "idea behind the dissolution was to accommodate new members in the expanded family, and to reorganise the party before the Assembly polls".

This time, the political fight is going to be between the BJP and the AAP, he claimed, and said "with the public supporting us, the new AAP organisation will be able to fulfil their expectations for a change."

A total of 850 AAP members have found the place in the restructured organisation in Gujarat, as per the list release by the party.

The AAP has appointed Kishor Desai as the state president (frontal organisation), Manoj Sorathiya as state general secretary, and Kailash Gadhvi as treasurer.

The AAP has also appointed presidents and vice presidents of various wings, secretaries, joint secretaries at the state level, Lok Sabha and district pramukhs, and Vidhan Sabha sangathan mantris, according to the list.

"As we speak, our organisation at the village level is also ready, and we have already put in place an 11-member team in each village," Pathak said.

He claimed the Gujarat AAP unit is now capable of challenging any party with the best organisational capability in the state.

"When we reach the booth-level and map every house, we shall be fully prepared organisation-wise," he said.

Pathak said the AAP is an organisation-specific party, and it has received an unprecedented response in the state.

"The response we received in setting up the organisation is double than that of Punjab. In just one month, we managed to do this. The energy was there and people were ready. They were only looking for an alternative," Pathak said.

He claimed the political fight this time will be between the BJP and the AAP.

"The way people are with us and God is with us, our organisation will fulfil the expectations of the public for a change," Pathak said.