Not a single tree branch will be cut if Singh Deo doesn't want so: CM Baghel on Hasdeo Arand

Deo, the health minister and local MLA, had extended support to protesters 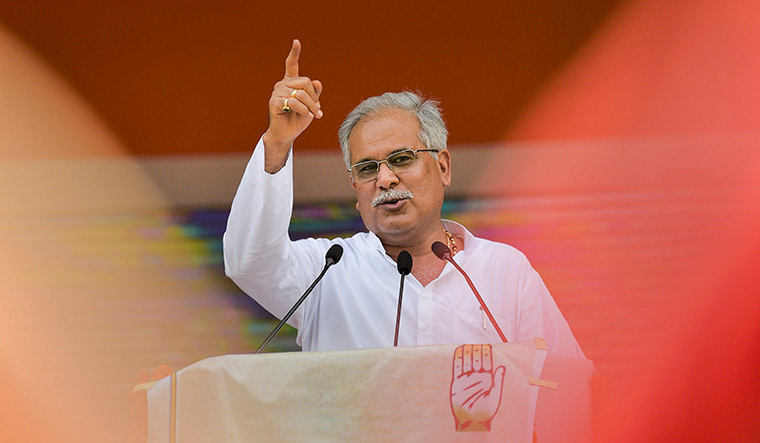 In a crucial statement on the controversial mining projects in Hasdeo Arand forests, Chhattisgarh Chief Minister Bhupesh Baghel on Tuesday said that if 'Baba Saheb' (health minister T.S. Singh Deo) does not want it, not even a single branch, let alone trees, will be cut in forests.

“Singh Deo is the local MLA and our senior minister. If he doesn't want it, not even a branch will be cut without mutual consent,” the chief minister said.

Baghel's statement comes a day after Singh Deo, who is the Sarguja MLA under which the controversial coal mining project areas fall, met protesting tribals at Hariharpur village and pledged support to their cause saying that mining should not be undertaken at the cost of dense forests. The minister told the protesters that if they are united, no one can take their land. He also said that if the protesters were fired at, he (Singh Deo) would take the first bullet.

Responding to this, CM Baghel said that there was no question of any firing on protesters and rather anyone who tried so would be fired at.

Interestingly, only on Saturday, the chief minister had shown an aggressive stance, saying that the activists protesting against the coal mining projects should first switch off power at their homes. Baghel had spoken about the inadequacy of the current alternative power sources and dependence on thermal power.

Baghel's statement also assumes importance especially because of his politically strained relations with Singh Deo, who was one of the main contender for Chhattisgarh CM post and had led a strong campaign last year to stake a claim to lead the second half of the tenure of Congress government in the state under a purported '50:50' formula.

Newly approved mining projects in Hasdeo Arand has led to intensification of protests by local tribals who have always claimed that false gram sabha consents were used to give clearance to the mines.

In March-April this year, the Baghel-led Congress government in the state gave the final approval for mining in Parsa East and Kete Basan (PEKB) mine and Parsa open-cast mine in the Hasdeo forests. The PEKB mine spanning 1,136.32 hectare and Parsa mine of about 841.53 hectare were both allotted to Rajasthan Rajya Vidhut Udpadan Nigam (RRVUL) after Rajasthan Congress chief minister Ashok Gehlot met Baghel in Raipur.

Protests against ongoing and proposed mining activities are now being done for almost a decade and an indefinite dharna was launched in Hariharpur of Sarguja three months ago after the final approval of the mines. The issue has snowballed into a major controversy after local authorities reportedly cut down hundreds of trees surreptitiously on the night of April 26. According to local activists, around 4.5 to 5 lakh trees are to be felled for the two mining projects in the Hasdeo area.

Activists have taken up the issue with the Supreme Court and on various national and international forums. Recently, Congress leader Rahul Gandhi, answering a question during an interaction with Cambridge students, said that he is of the view that the protest against the mining projects in Hasdeo Arand was ‘justified in some ways.’

On Tuesday, Baghel also lashed out at the BJP leaders saying that if they were supporting the protests of local people, they should get the coal block allotments in the forests cancelled by the central government, which has the powers. This would finish off the entire issue, the CM said.