Hardik joining the BJP would lead to consolidation of Patidar votes 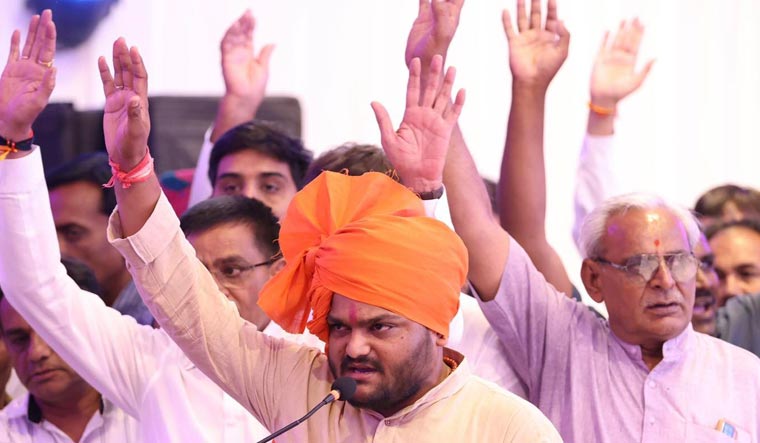 Nearly a fortnight after he quit the Congress, Patidar leader Hardik Patel is all set to go saffron. Patel confirmed to THE WEEK that he will join the BJP on June 2.

BJP's state spokesperson Yagnesh Dave also confirmed the reports. "It is confirmed that Hardik Patel will join the BJP on June 2 in the presence of state president C.R. Paatil," he said.

The function is expected to be held at Shree Kamalam, the BJP’s state headquarters in Gujarat.

For the Congress, Patel's resignation and his induction into the BJP are a double blow ahead of the Assembly elections scheduled to beheld by the end of this year.

The Congress had reaped the benefits of the Patel-led Patidar reservation stir in 2015 and won 77 seats in the 2017 Assembly elections. The BJP with 99 seats, however, managed to retain power.

The then BJP government in Gujarat had booked the firebrand leader in several cases, including on the charge of sedition, after the Patidar stir turned violent.

Patel joined the Congress in 2019 and was later made the state unit's working president. However, earlier this month, he quit the party.

Now, while the Congress struggles to get its act together, Patel joins a large number of youth leaders who would be an integral part of the BJP’s election campaign.

Sources said that Patel’s entry into the BJP comes after a nod from the BJP’s central leadership, especially from Prime Minister Narendra Modi. They told THE WEEK that the party had a meeting on May 29 and leaders had been asked not to comment on Patel till the time he joins.

Sources also said Patel was given two options to join. He was told to join in New Delhi in the presence of party's national president J.P. Nadda or at the state level in Gandhinagar. He preferred Gandhinagar.

In his resignation letter to Congress chief Sonia Gandhi, Hardik had lashed out at the Congress for criticising the Narendra Modi government's action on Article 370 and support for the Ram temple, among other issues.

This had led to speculation Hardik was cultivating favour with the BJP.

Some political observers have argued Hardik joining the BJP would lead to consolidation of Patidar votes in favour of the saffron party ahead of the Assembly polls.