Can't help it if our Hindutva campaigns benefit BJP in polls: Pramod Mutalik 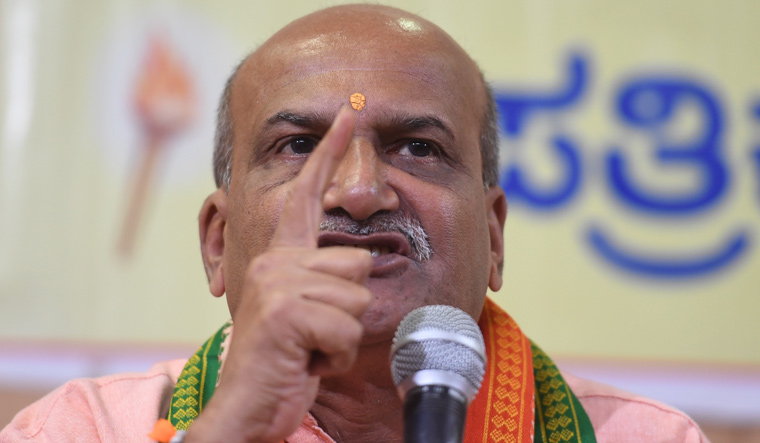 The communal polarisation in Karnataka ahead of the 2023 Assembly elections is certainly advantage BJP. But the Hindu outfits say their campaign against Halal meet, call to boycott Muslim traders and campaign against use of loudspeakers during the Azan in mosques, or the latest survey of "illegal" churches in the state have little to do with polls.

Sri Rama Sene, which was in the forefront of the protests against use of loudspeakers in mosques, countered it with the Suprabhata and chanting of Hanuman Chalisa in temples. The outfit opposed women buying gold from jewellery shops owned by Muslims claiming they funded cow slaughter,  love jihad and religious killings. This time, the Sena is preparing a list of "illegal" churches which they claim to be a hub for forced conversions.

"Our district presidents have been assigned the task of surveying the illegal and unauthorised churches. Within a week, we plan to petition the state government to take action against these illegal churches as they are indulging in forced conversions," said Pramod Muthalik, founder of the SRS.

While a slew of communal issues raked up by Hindu fringe groups in an election year is bound to benefit the BJP owing to communal polarisation,  Sene says it was not by plan that these campaigns are helping the BJP consolidate the Hindu votes.

"The issues related to Hindutva have always been important to us and we cannot help it if it is electorally benefiting the BJP.  In fact,  the BJP state president has openly declared that BJP has nothing to do with the Sri Rama Sene. So, our relationship with BJP has not been friendly for a long time, " said Mutalik.

It may be recalled that in 2018, Mutalik was inducted into the BJP but removed from the party the same day. The party's central leadership did not approve of Mutalik for his involvement in the pub attack in Mangaluru in 2009. The SRS joined hands with the Shiv Sena and contested in 40 seats in the 2018 Assembly polls in Karnataka, only to be rejected by the voters.

While Mutalik says his outfit is no more inclined to contest elections, it has certainly kept the pressure on the BJP government by riding on the Hindutva and Hindu majoritarian sentiment.  It was after the Sena gave an ultimatum to remove illegal loudspeakers did the BJP government act and issue 15-day deadline to remove all unauthorised loudspeakers from the mosques and other public places.

With Karnataka Governor Thawarchand Gehlot giving his assent to the anti-conversion ordinance and the state government notifying it to make it a law, amid stiff resistance from the Christian community, the Sena hopes that the government will effectively curb forced conversions.

Incidentally, the Minorities Development Corporation, too, has ordered a survey of churches, which was challenged by People's Union for Civil Liberties (PUCL) calling it as "unconstitutional".  While the court is yet to hear both sides, the Sena has taken it upon itself to carry out a survey to identify the "illegal" ones, which is being frowned upon by rights activists.

"The government had announced the survey without stating the objective of such an exercise. Now the government (in its reply to the High Court) has claimed it is to help them plan and utilise the development funds effectively.  Now, an extra constitutional authority (Sena) is trying to do the survey. This is a violation of the Constitution," said Prof Y.J. Rajendra of PUCL.