PM Modi visits Lumbini as India-Nepal ties get a boost 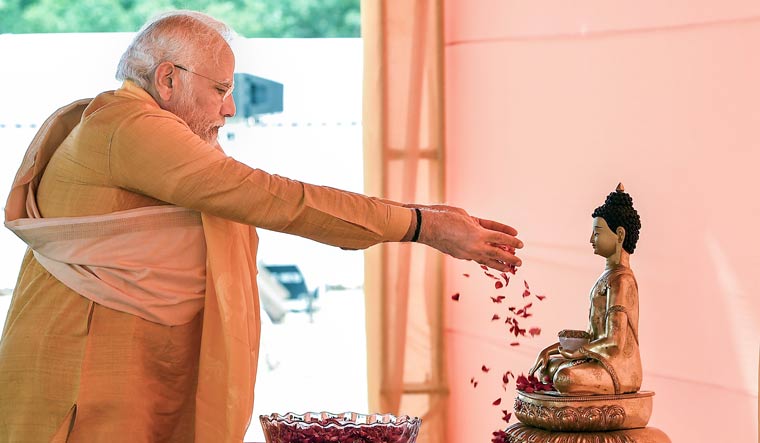 As Prime Minister Narendra Modi sat beside Nepal Prime Minister Sher Bahadur Deuba in a saffron backdrop to take part in the shilanyas for the India International Centre for Buddhist Cultural and Heritage in Lumbini, it was clear that the bonds of prayer are stronger than other ties. And it is this bond of faith that India is hoping will be unshakable.

“I feel blessed to have prayed at the Maya Devi Temple on Buddha Purnima. May Lord Buddha bless us all and make our planet peaceful and prosperous,'' tweeted Modi.

It was Modi's first visit to Lumbini the birth place of the Buddha. The centre will give a chance for India to be present in the Lumbini Monastic Zone finally. While there is a museum built by India—dating back to the 1990s—there is no Indian monastery. Other countries have temples in the area including Vietnam, which was the first to build one, Myanmar, the Korean temple and the largest monastery built by China.

Prime Minister Modi may count on Ram, one of the most powerful Gods to be invoked in the region, domestically to appeal to his core voters, but in the neighbourhood Buddha reigns supreme. It has also been a key element of Modi’s ‘Act East’ policy. And with China wanting to lay claim to this legacy, the task is cut out for India.

The power of prayer may be about closer relations, but it is also about strategy. India is hoping that the centre—which will have meditation centres, a library, exhibition halls etc—will be able to reclaim this space. Especially, in Lumbini, where the Chinese have been slowly trying to assert their claim. It was in this space where the claims by China and India come head to head.

The centre will be built by the International Buddhist Confederation.

The visit is also political. In the past few years, there has been a growing sensitivity about India claiming Buddha as Indian. In 2020, the remarks of the minister of external affairs S. Jaishankar referring the Buddha as one of the greatest Indians born sparked a controversy forcing the MEA to clarify that there was no dispute where the Buddha was born. With Modi's visit to Lumbini, and his acknowledgement of shared heritage will go a long way in ensuring that there is no strife on that front.

On the agenda is closer cooperation between the two countries over the Buddha. The MoUs signed include the establishment of an Ambedkar Chair for Buddhist Studies between the Indian Council of Cultural Relations—an attempt for India to establish its own scholarly credentials over Buddhism.