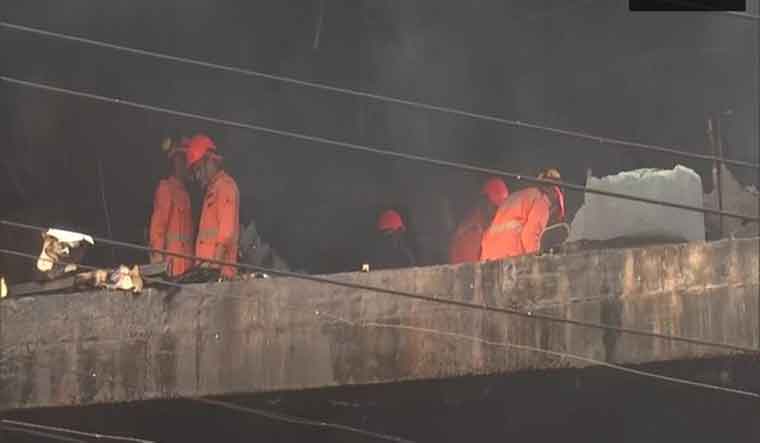 27 people were reported killed, and 12 injured, after a massive blaze ripped through a four-storey building in outer Delhi's Mundka on Friday. A National Disaster Response Force (NDRF) team on Saturday carried out a search and rescue operation in the four-story building, news agency ANI reported. Delhi Chief Minister Arvind Kejriwal will visit the site of Mundka fire incident later this morning.

The fire started from the first floor that houses the office of a CCTV cameras and router manufacturing and assembling company. The owners of the company—Harish Goel and Varun Goel—have been detained. Lakra lives on the top floor, and an FIR is being registered against him under relevant sections of the Indian Penal Code.

Over 50 employees of the company whose office was located on the first floor were rescued while 27 bodies have been found, they said. Some ambulances were also made available at the spot to provide immediate medical assistance to the rescued victims. There also traffic jams in the area due to the fire.

The blaze was "doused" around 11pm, but cooling operations were underway, a senior fire department official said. President Ram Nath Kovind and several political leaders including Prime Minister Narendra Modi, Union Home Minister Amit Shah and former Congress president Rahul Gandhi expressed grief at the loss of lives in the incident. "Extremely saddened by the loss of lives due to a tragic fire in Delhi. My thoughts are with the bereaved families. I wish the injured a speedy recovery," Modi said in a tweet. He said Rs 2 lakh each from the Prime Minister's National Relief Fund will be given to the next of kin of those who lost their lives, and Rs 50,000 to the injured.