Why Bengal has a high death rate in the third wave

The state's health department is clueless but experts share their views 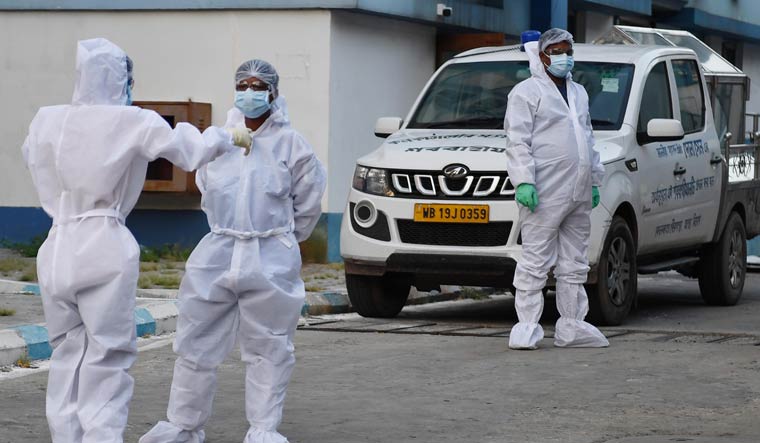 The Covid-19 death rate in West Bengal has been high during the third wave despite the infection rate going down as per official numbers. This is contrary to the perception that the third wave, driven mainly by Omicron, is mild and therefore would not cause many deaths.

The Bengal statistics tell a different story. For the last seven days, the average number of deaths per day is 35 more than the average during the second wave. The death rate is 1.03 per cent (over 2 since the third wave broke out), which is the highest in the country.

The positivity rate is 9.53 per cent. On January 23, the infection rate had dropped below 7,000 for the first time since the third began. But 37 persons died across the state and a majority of them in urban areas of Kolkata and North 24 Parganas. Bengal has 20,338 official deaths so far due to Covid since 2020.

The health department of Bengal is clueless about the rise in deaths and refused to respond to queries. Sources told THE WEEK that for the last few days, the actual deaths might be double the official figures.

Chief Minister Mamata Banerjee is also the health minister of the state. The governor of West Bengal has pulled up the chief minister on many issues, but the Raj Bhavan, this time, has stayed silent over this issue.

“These infections are caused by the Delta variant, not Omicron. We cannot say all infections are because of Omicron as we are not performing genomic analysis of variants in all ICU patients,” said Dr Subhrojyoti Bhowmik of Peerless Super Speciality Hospital, Kolkata.

“A majority are dying with co-morbidities like diabetes as well as the elderly with low immunity. Though they might have taken the vaccine, some might be vaccine non-responders with low immunity where even Omicron could cause death.”

Leading clinical trial specialists also point out the fallacy in the treatment protocol, where anti-viral vaccines are not given or withdrawn from patients without explanation.

“The absence of definitive antiviral medication during treatment phase is another factor to consider. Medications like Molnupiravir have not been used in the early phases by many doctors leading to flaring up of infection in susceptible patients,” said Bhowmick.

Interestingly, Molnupiravir, which is considered to be a magic pill in the USA and Great Britain, has been withdrawn from the treatment protocol by the ICMR in India. Many doctors call it a “callous decision” on the part of the ICMR.

“It is a lifesaving drug and its positives overtake its negatives. It has been withdrawn by the ICMR in India due to sheer lack of knowledge,” said a senior internal medicine specialist in Kolkata.