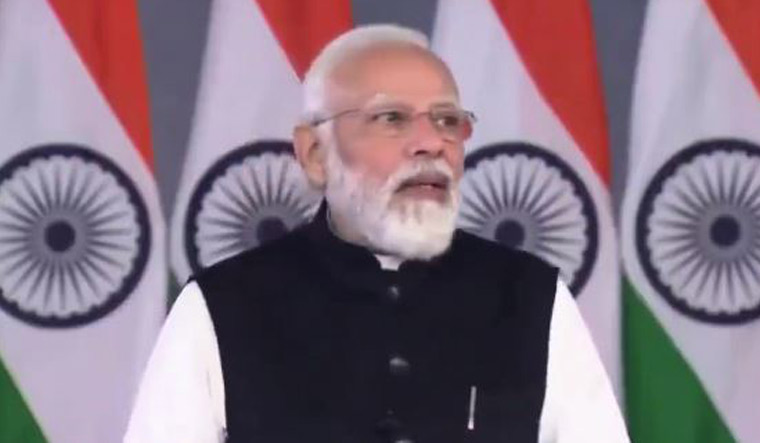 PM Narendra Modi during his speech at the WEF | Via Twitter

A brief interruption during the speech by Prime Minister Narendra Modi at the World Economic Forum on Monday has provided ammunition for his critics.

Video of the speech showed Modi looking to his left side repeatedly and then asking Klaus Schwab, the executive chairman of the WEF, whether his speech and his interpreter's voice could be heard properly.

Once the apparent glitch was rectified, Modi started his speech all over again.

The interruption was noted on social media, with many users attributing it to a teleprompter fault.

Former Congress chief Rahul Gandhi tweeted on Tuesday “Even teleprompter could not bear such lies”. Rahul had previously attacked Modi over his allegedly choreographed speeches. During campaigning for the 2019 Lok Sabha polls, Rahul alleged Modi “speaks by looking at the teleprompter and his speech is controlled by a controller from behind,” ANI had reported at the time.

A number of Congress-linked handles took note of the Davos speech. The official Congress Twitter handle claimed, “We were robbed by the teleprompter...” and used the hashtag TeleprompterPM.

Congress MP Karti Chidambaram had a satirical take on the incident. He tweeted, “A commission of enquiry should be formed, international conspiracy angle must be probed.”

Gujarat MLA Jignesh Mevani, who won in the 2017 assembly election with Congress support, alleged Modi could target the “teleprompter operator”. Mevani wrote, “Worried about teleprompter operator. We all know how vindictive he can get, especially when it’s his own inadequacies are exposed.”

It is yet unclear what caused the interruption in Modi's speech. Pratik Sinha, who runs the popular fact-checking outlet Alt News, tweeted it was unlikely Modi had a "teleprompter gaffe". Sinha shared a clip from the WEF version of the speech, in which someone in the background could be heard asking Modi, “Sir aap unse ek baar pooche ki sab jud gaye kya (Sir, please ask him [Schwab] if everything is clear)”.

Sinha noted, “The teleprompter is typically in the front. When the PM is distracted, he looks to the side, where probably the team managing the event from the PMO is sitting. It is likely that someone from the team was trying to get the PM's attention.”