Maurya's quitting the BJP will be bad optics for the party 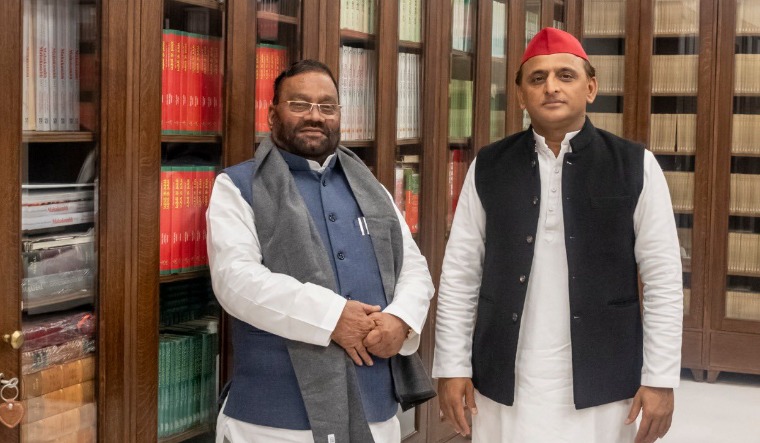 On August 8, 2016, then BJP chief Amit Shah welcomed key OBC leader Swami Prasad Maurya into the BJP at the party headquarters in Delhi. Maurya, who served as leader of opposition in Uttar Pradesh, had quit BSP after alleging that Mayawati auctioned tickets. His entry helped BJP woo non-Yadav OBCs in the state to win a massive mandate a few months later in the 2017 elections.

Now, on a day when Home Minister Shah held a meeting with state leadership, including Chief Minister Yogi Adityanath, at Delhi party headquarters, to strategise on candidate selection, Maurya shocked the party leadership as he resigned from the Adiyanath cabinet and joined Akhilesh Yadav-led Samajwadi party. Three other MLAs loyal to Maurya, too, quit the BJP.

This has come as a huge setback for the ruling BJP, upsetting its strategy of getting together non-Yadav OBCs, and non-Jatav dalits castes ahead of elections. Despite being numerically significant, the non-Yadav OBC and non-Jatav dalits were not adequately represented in the earlier Samajwadi Party or BSP governments. Five-time MLA Maurya has a sway among the Maurya and Kushwaha communities, which together constitute between 6 to 8 per cent of state population. The BJP will have a hard time filling the gap left by Maurya as his influence is said to be in eastern and central UP.

Maurya was first given ticket by the BSP in 1996, and he went on to become an MLA and then minister in the Mayawati cabinet. Being a key Mayawati aide, he was instrumental in bringing other backward communities to BSP. He quit the party over distribution of tickets. Since he left BSP, the party could not get a leader his leader stature to woo the OBCs.

After he joined the BJP, the party won unprecedented mandate in state and Lok Sabha elections. Maurya's significance can be gauged from the fact that BJP gave a Lok Sabha ticket to his daughter Sanghamitra Maurya, who won from Badaun defeating Mulayam Singh Yadav's nephew Dharmendra Yadav. Sources in the BJP said Swami Prasad Maurya was miffed as felt he was ignored in the state government, and the party was not ready to give a ticket to his son in the upcoming elections. Maurya can further dent the BJP, as MLAs close to him, or who are denied tickets by the party, can quit and join the Samajwadi Party. A day earlier, another BJP MLA R.K. Sharma had joined the SP.

In the country's politically most significant state, caste politics plays a main role. The party which is able to stitch an alliance, or bring leaders representing different communities including OBCs, Dalits, Brahmins, into the fold, has a chance to form the government. Both the BJP and SP, the two main contenders in the 2022 elections, are following the same strategy as they have aligned with several smaller parties representing castes like Kurmis, Rajbhars and Jats.

When Maurya was part of the BJP, it helped the party bring OBCs into the Hindutva fold. Now that he has quit, will the BJP's Hindutva plank, which looked at combining myriad castes under a common Hindu identity, be dented?

Maurya's quitting the BJP is also bad optics for the party. On the eve of elections, it was the BJP style of inducting new faces and turncoats to create a perception, or hawa (atmosphere) as it is called colloquially, to present itself as the party where everyone was headed. Maurya's exit will create difficulties for Yogi Adityanath, as it gives vent to those questioning his leadership. BJP's loss is Akhilesh Yadav's gain, as he has emerged as the main competitor of the BJP in these elections.