2021 had ended on a sour note for Sino-India ties 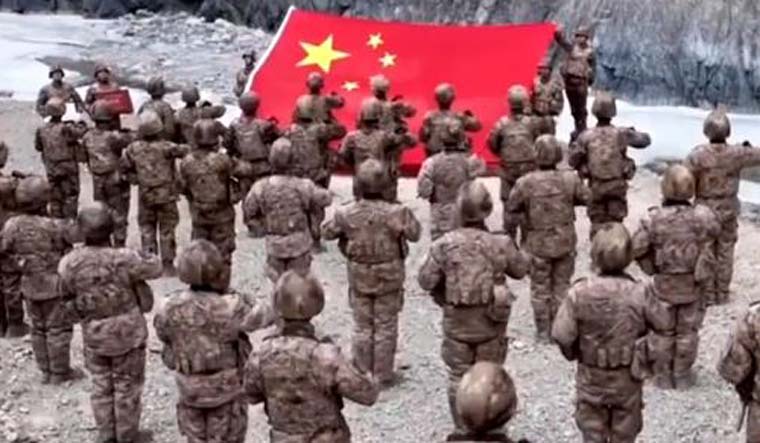 Screenshot from a video showing Chinese soldiers in Galwan | Via Twitter

It will be a winter of heated exchanges. On January 1, pictures of Chinese soldiers unfurling their national flag at Galwan valley were posted on a government mouthpiece. The ministry of external affairs remains tightlipped but reports have quoted the Indian Army sources as claiming that the flag was unfurled in the non-disputed areas under Chinese control.

Interestingly, this provocation came on the same day that Indian soldiers exchanged greetings and sweets with their Chinese counterparts on 10 locations on the border, setting the tone, once again, for the rather complicated relationship between the two countries.

Global Times on January 1 had tweeted “In the Galwan Valley near the border with #India, under the characters 'Never yield an inch of land,' PLA soldiers send new year greetings to Chinese people on January 1, 2022.” In another tweet, it was claimed that the flag unfurled at Galwan was the same one that flew over Tienanmen Square in Beijing. Shen Shiwei, from affiliated Chinese state media, tweeted “China’s national flag rise over Galwan Valley on the New Year Day of 2022. This national flag is very special since it once flew over Tiananmen Square in Beijing.”

While this fits into a classic China tactic, one thing is certain that the tension at the LAC is far from over. 2021 had ended on a somewhat sour note too. On December 30, China's Ministry of Civil Affairs renamed 15 places in Arunachal Pradesh—eight townships, two rivers, four mountains and a mountain pass—in Mandarin. China insists on referring to the state as South Tibet. This was the second batch of places renamed by China since 2017. India reacted strongly. “We have seen such. This is not the first time China has attempted such a renaming of places in the state of Arunachal Pradesh. China had also sought to assign such names in April 2017,” said Arindam Bagchi, spokesperson of the ministry of external affairs. “Arunachal Pradesh has always been, and will always be an integral part of India. Assigning invented names to places in Arunachal Pradesh does not alter this fact,” Baghchi said.

China, however, chose to continue to bait India and at a foreign affairs briefing claimed that Arunachal Pradesh was “China’s territory since the ancient times”. This comes at a time when China's new border law came into effect on January 1.

The question remains as to how this will play out. But if the past few days are any indication, the tension is here to stay and will cast a shadow on the subcontinent.