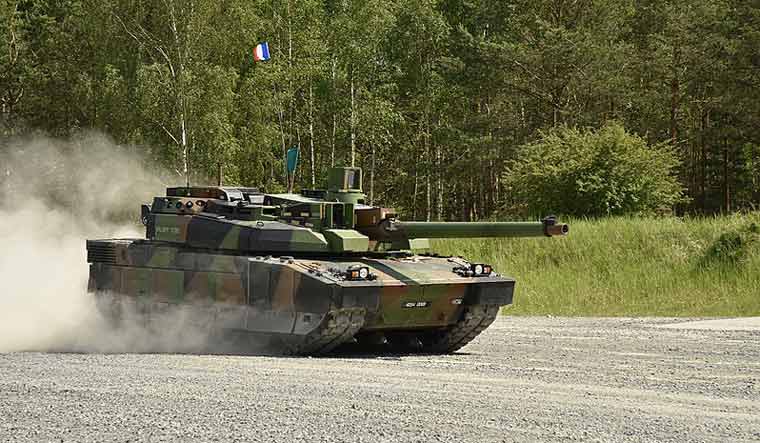 A Leclerc MBT | Via Wikimedia Commons

In June last year, 12 companies supplying main battle tanks received requests for information (RFIs) from the Indian government. The RFIs related to the supply of about 1,770 new tanks for the Indian Army under a programme dubbed the Future Ready Combat Vehicle (FRCV).

In the works for over a decade, the FRCV envisages the replacement of the Indian Army's fleet of Soviet-era T-72 tanks. The first of the new tanks are intended to enter service by 2030 and will feature advanced networking capabilities to communicate with both land and air forces. The value of the FRCV contract was earlier estimated to be around $5 billion. France's Nexter was one of the companies to receive the RFI, along with firms in Russia, Israel, Europe, Turkey and the US.

Last week, the French government informed the National Assembly, the country's lower house of Parliament, it would support Nexter's industrial proposal for India. The FRCV project envisions manufacturing of the selected tank in India with a 'strategic partner'.

The French government's response was published on December 28 and came in response to a question from Nicolas Dupont-Aignan, a deputy in the National Assembly. Asking about India's FRCV project, Dupont-Aignan had called for resuming production of Nexter's existing Leclerc tank. The French Army had inducted a total of 406 Leclerc tanks by the mid-2000s. The Leclerc has also been exported to the UAE, which donated dozens of the type to Jordan.

In his question, Dupont-Aignan pointed out that France was modernising only around 200 Leclerc tanks for use until 2040. Dupont-Aignan pointed out that “during the next 20 years nothing is planned to effectively reinforce the heavy land combat means” of the French Army. He argued that Nexter winning the FRCV contract would mean separate production lines for the Leclerc in both France and India that would make “purchase price of this tank particularly competitive, both for the Indian and French armies and for export”.

He argued France needed at least 400 tanks. Dupont-Aignan also pointed to the possibility of sharing with India the cost of developing specialised versions of the Leclerc for purposes such as command vehicle, artillery platform and anti-aircraft defence.

In its response to Dupont-Aignan, the French government said it would ensure attention to synergies “that may exist between the needs of the Indian armies and our national needs”.

In his question, Dupont-Aignan noted, “The Leclerc tank with its mass of only 55 tons, its good mobility with its 1,500 hp engine and the excellence of its turret and firing system, is very well placed” to win the FRCV contract.

The Leclerc is lighter than most major Western tanks such as the US M1 Abrams, British Challenger and German Leopard 2, all of which weigh over 60 tonnes.

The Leclerc also has a three-man crew, unlike the other three Western designs, with the 'loader' absent. In place of the loader, a soldier who manually inserts rounds into the gun, the Leclerc has an 'autoloader' device for the purpose; Russian tanks such as the T-72 and T-90 also have auto-loaders. The Leclerc also has an advanced communications system to network with ground and air units.

The Leclerc tanks of the French Army are currently being upgraded to the Leclerc XLR standard, which would feature a modular armour package, new combat information system, radios, jammers and remotely operated machine gun.

Nexter is working on a futuristic tank project with Germany's Krauss Maffei Wegmann for a common tank to replace the Leclerc and Leopard 2, but the vehicles are unlikely to enter mass production by 2040. The French government's response in the National Assembly did not specify what kind of tank Nexter would offer to India.