The Union minister's son is among the 13 accused 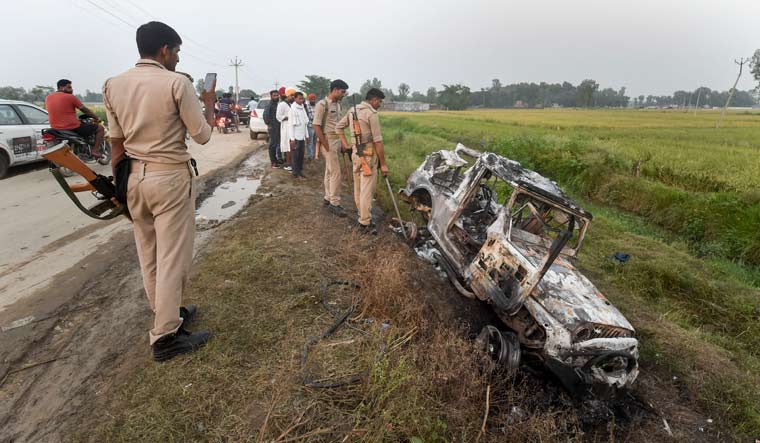 The SIT of the UP police that is probing the Lakhimpur Kheri violence has submitted before a court that the killing of four farmers and a journalist in which Union minister Ajay Mishra's son Ashish Mishra is among the 13 accused was a "pre-planned conspiracy", and also sought to substitute lesser charges in the case with graver ones.

After hearing arguments on the application moved by the Special Investigation Team(SIT), Lakhimpur Chief Judicial Magistrate (CJM) Chinta Ram on Tuesday allowed it to add IPC sections 307(attempt to murder) and 326 (voluntarily causing injuries by dangerous weapons) in the FIR in which Ashish Mishra is the main accused, Senior prosecution officer SP Yadav told PTI. Relevant charges under the Arms Act were also allowed to be added.

The submission by the SIT on Monday sparked fresh demands by Congress leaders Rahul and Priyanka Gandhi that Prime Minister Narendra Modi immediately sack Ajay Mishra, who is the Minister of State for Home. Rahul also said it was time for Modi to apologise again.

The SIT also contended that the evidence gathered so far established that the violence leading to the death of the four farmers and a journalist and injuries to several others was "not an act of negligence or carelessness".

The violence in Tikunia on October 3 that set off a political storm ahead of the Assembly elections in Uttar Pradesh and Punjab among other states had left a total of eight people including two BJP workers dead and two separate FIRs were filed.

It erupted when a group of farmers was protesting the visit of UP Deputy Chief Minister Keshav Prasad Maurya to Ajay Mishra's native place.

It urged the CJM to replace IPC sections 279 (rash driving/riding), 338 (causing grievous injuries by negligence) and 304A (causing death by a rash and negligent act) with IPC section 307 (attempt to murder) among other charges in the first FIR.

The SIT pleaded for invoking IPC sections 326 (voluntarily causing injuries by dangerous weapons), 34 (acts by several persons with common intentions) and sections 3/25/30 of the Arms Act in the warrants of the 13 accused.

It retained IPC sections 302 (murder), 147 (rioting), 148 (rioting, armed with a deadly weapon), 149 (every member of unlawful assembly guilty of offence committed in prosecution of common object) and 120B (criminal conspiracy).

"After hearing arguments of the prosecution and the defense counsels on Tuesday, the CJM allowed to drop section 279, 338 and 304A of IPC against the accused," Yadav said.

All the 13 accused in the first FIR including Ashish Mishra were produced in the court.

The defense counsels objected to adding section 34 of IPC.

The court held that addition of section 34 as unjustified as the accused had already been remanded under IPC section 149, Yadav said.

Yadav said Chief Investigator of the SIT Vidyaram Diwakar, probing the Tikunia violence, moved an application before the court on Monday stating that the probe and evidence gathered so far established that the violence leading to the death of five people and injuries to several others was "not an act of negligence or carelessness."

"The chief investigator stated in his application that the act was a pre-planned conspiracy, causing death, owing to which the earlier IPC sections in the FIR namely sections 279, 338 and 304A were dropped and IPC sections 307, 326, 34 and sections 3/25/30 of the Arms Act were added," Yadav said.

Yadav said the chief investigating officer urged the court to rectify the warrants of the 13 accused accordingly in the first FIR.

The UP government had formed a nine-member SIT to investigate both the cases. The SIT was later reconstituted by the Supreme Court.

The Samyukt Kisan Morcha(SKM) said the Modi government should stop shielding Minister Ajay Mishra, and dismiss him from the post. The umbrella body of farmers' unions said the SIT finding has reaffirmed its stand that the incident was a "pre-planned massacre".

Priyanka Gandhi, AICC general secretary in-charge of UP, accused Prime Minister Modi of having an "anti-farmer mindset" and demanded that he should initiate an inquiry into the role of his ministerial colleague Ajay Mishra in the violence.

"Due to the court's rebuke and because of 'satyagraha', now even the police is saying that the son of the Minister of State for Home had conspired and crushed the farmers," Gandhi said in a tweet in Hindi.

"But @narendramodi ji, due to anti-farmer mindset, you have not even removed him from his post," the Congress general secretary said.

In a statement, she said that when the SIT has stated that the Lakhimpur "farmer massacre" was a pre-planned act then why are Prime Minister Modi and the Home Minister Amit Shah still "protecting" the minister of state for home.

"The victims' families and we, doing satyagraha, have been demanding since day one that the minister of state for home should be dismissed. Because the people present at the spot and the families of the victims had clearly stated that the violence was done with conspiracy and the farmers were crushed," Priyanka Gandhi said.

"Modi ji, it is time to apologise again... But first remove the accused's father from the minister's post. The truth is before you!," Rahul Gandhi said on Twitter, using the hashtags "Lakhimpur" and "murder".

He alleged that the minister tried to kill farmers and the prime minister knew as he was a member of his team.

"A minister has tried to kill farmers. The prime minister knows as he is in his team. We raised the issue but we were not allowed a discussion on it even then. We were all silenced at the time after we wanted to discuss the issue," he told reporters in Delhi when asked about the matter.

In response to another question, he said, "When they ran their jeep over farmers, which forces were behind them? Who gave them the liberty and which force kept them out of jail?"

"Dear Modi ji, now in Lakhimpur Kheri the conspiracy to kill farmers has come to the fore. Today you should apologise to the farmers from the stage in Uttar Pradesh and sack the minister of state for home," he said, claiming that otherwise it will be proved that the massacre of farmers took place at the behest of the Yogi-Modi government.

UP Congress chief Ajay Kumar Lallu also said that the prime minister should immediately dismiss Mishra if he is sensitive towards farmers.