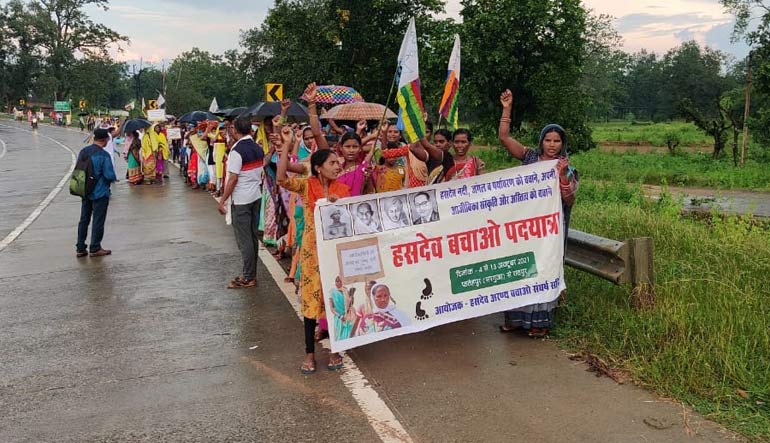 Prominent environment and wildlife conservationists have written to Chhattisgarh Chief Minister Bhupesh Baghel, urging him to overturn the recent decision of the state government to open up and expand mining operations in the ecologically sensitive Hasdeo Arand forests in the state.

Twenty-five conservationists have written a detailed letter, highlighting the fact that the Chhattisgarh government allegedly chose to suppress a Wildlife Institute of India (WII) report underlining the adverse effect of mining in the eco-sensitive forests.

The said the WII report was part of a joint expert study with the Indian Council of Forestry Research (ICFRE), conducted as per a 2014 direction of the National Green Tribunal (NGT).

“While ICFRE was to be the nodal agency, the biodiversity assessment was conducted jointly by WII and ICFRE, with the former studying aspects related to mammals, avifauna and herpetofauna, and the latter focusing on floral diversity. We note with dismay that in your subsequent recommendation to the ministry of environment and forests (MoEFCC) that further areas of Hasdeo Arand Coalfields (HACF) be opened up for mining, your government has chosen to ignore the findings and recommendations of the extensive assessment conducted by WII, India’s foremost wildlife research organisation,” the letter stated.

Chhattisgarh government recommended taking up new proposals for mining in Parsa, Kente Extension and Madanpur South coal blocks and the expansion of mining in the Parsa East and Kente Basan (PEKB) block, conservationists pointed out in the letter.

“We believe this to be an ill-considered decision, one that will have devastating long-term consequences for the natural heritage of Chhattisgarh and the lives and livelihoods of millions. It is, furthermore, a decision that lacks both scientific legitimacy and popular mandate, since it neither accurately represents the will of the indigenous communities that reside in the Hasdeo Arand forest, nor follows the recommendations of the expert study that was conducted to evaluate the environmental and biodiversity conservation impacts of mining in the region.”

The letter quotes from the WII report to mention the ecological importance of Hasdeo Arand in context of bio-diversity, tiger population and possible man-elephant conflict.

The Hasdeo Arand forest, in which the HACF lies, is one of the largest contiguous stretches of dense forest in Central India, spanning 170,000 hectares. It is also the watershed for the Hasdeo Bango reservoir, which is critical for irrigation of 3,00,000 hectares of double-cropped land in Chhattisgarh. The WII report notes that “sustaining the forest cover and maintaining its overall ecological integrity is essential.”

The report also observed that “intact habitat connectivity with tiger source population and relative vastness of the landscape could augur well for recovering tigers,” with the caveat that “tiger conservation would be conditional on maintaining habitat connectivity [and] retaining forest cover.”

“The coal mines along with the associated infrastructure development would result in loss and fragmentation of habitat. Any further threat to elephants’ intact habitats in this landscape could potentially deflect human-elephant conflict into other newer areas in the state, where conflict mitigation would be impossible for the state to manage.”

The letter also mentions the opposition of the tribal dwellers of the forest to the mining operations and their 300-km foot march to Raipur in October this year for the purpose. The fact that Congress leader Rahul Gandhi had, in June 2015, pledged his support to the communities battling to protect forests has also been mentioned in the letter. “The recent decision by your government would seem to be a betrayal of that promise.”

The letter mentioned that the WII report unequivocally establishes that the HACF area “has significant conservation value and is/was habitat to rare, endangered and threatened fauna.” The report recommends that mining operations may only be permitted in the already operational [PEKB] mine of the block, and that other areas in HACF and landscape surrounding it should be declared “no-go areas” and no mining should be carried out considering the irreplaceable, rich biodiversity and socio-cultural values.

“Given the suppression of the WII report and the internal contradictions between the findings and the recommendations of the ICFRE report, you would excuse us for wondering whether your government’s decision to open up the rich and bio-diverse Hasdeo Aranya forest for further mining has less to do with the exigencies of ‘development’ than it does to the convenient exploitation of forest resources and indigenous communities in the name of ‘development’.”

“We urge you to overturn your government’s recommendations to the MoEFCC regarding the opening up and expansion of further mining operations in HACF. In doing so, you would only be fulfilling the mandate you have received to safeguard the natural heritage of Chhattisgarh and the lives, livelihoods and rights of indigenous communities.”