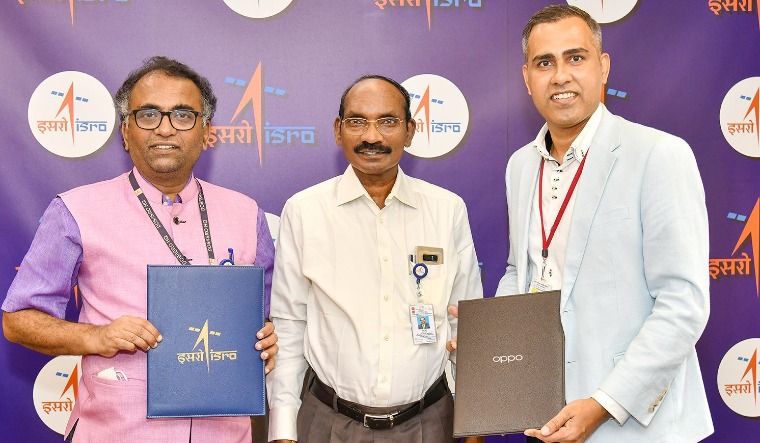 ISRO and Oppo officials after signing of the agreement | Via Twitter

On Friday, ISRO signed an agreement with the Indian arm of Chinese smart device maker Oppo on R&D on the NavIC satellite navigation system.

As the agreement was signed even as the standoff with China was continuing, opposition parties were quick to take pot shots. B.V. Srinivas, the national president of the Indian Youth Congress, took a jibe at the Narendra Modi government's decision last year to ban several Chinese apps, including popular video platform TikTok. He tweeted, “... Shall we say Thank you TikTok Modi ji?”

Congress national spokesperson Dr Shama Mohamed referred to the standoff in Ladakh in a tweet. She wrote “On the one hand, China is illegally annexing Indian territory & on the other, ISRO ties up with Chinese mobile manufacturer Oppo for tech R&D! Shocking! #modinomics.”

Congress social media activist Vijay Thottathil asked about the risk of Chinese “sabotage”. He tweeted, “Poor TikTok was just a time pass app ! Now ISRO will use Oppo for developing navigation system! What is the guarantee that Chinese will not sabotage it ?? Will Modi or Indian Govt lead by them take the responsibility? This is clear proof of how Modi is fooling Indians!”

Shiv Sena Rajya Sabha MP Priyanka Chaturvedi tweeted “Hello China Lots of Love ISRO”. She argued, “It amazes me no end that on one hand we as a nation are trying to fend them off the border, reduce their exposure to Indian markets and yet important arms of India and national security continue to be oblivious to the threat.”

NavIC (Navigation with Indian Constellation) is ISRO's independent regional satellite navigation system, providing position and navigation information over India and 1,500km beyond the mainland. NavIC is considered a regional analogue to the ubiquitous GPS, which is a US system. A total of eight satellites are in orbit providing information for NavIC.