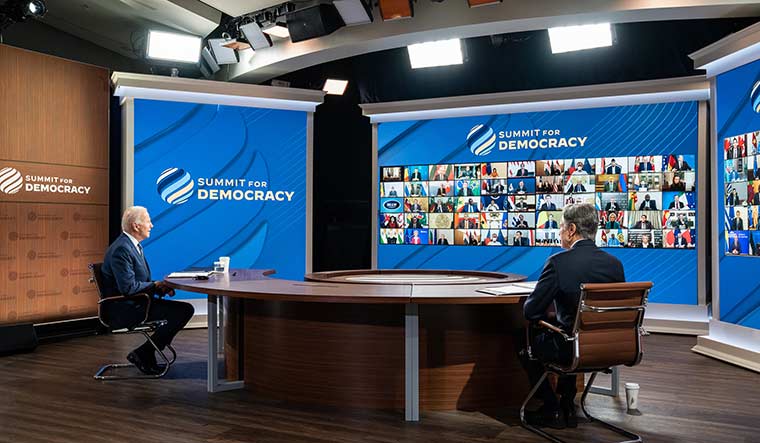 It has certainly not begun with a bang. Prime Minister Narendra Modi was one of twelve invited to speak at President Joe Biden’s Summit of Democracy—an endorsement of India’s special place—on Thursday. But the two-day summit—a flagship Biden endeavour—that brought together a hundred leaders, has been far from a hit.

“Democracy doesn’t happen by accident,’’ said Biden in his inaugural address. “And we have to renew it with each generation. In my view, this is the defining challenge of our time.” But beyond the battle for democracy globally—the summit has thrown up challenges for America within South Asia, a region that America realises is key to dealing with China. Beijing was never on the list.

Only four countries from the region were invited: Pakistan, India, Maldives and Nepal. On Wednesday, Prime Minister Imran Khan backed out of the virtual summit. The invitation issued to Khan was not so much an endorsement of sound democratic institutions, but more an acknowledgement of the importance Pakistan plays especially with Afghanistan’s instability. Khan, however, still miffed about not being included in Biden’s call list, has chosen to politely decline.

A statement put out by Pakistan’s foreign office said: “We value our partnership with the US, which we wish to expand both bilaterally as well as in terms of regional and international cooperation. We remain in contact with the US on a range of issues and believe that we can engage on this subject at an opportune time in the future.” It also, helps that China would be less than happy with Pakistan attending.

Bangladesh, another country—Muslim dominated—did not make the list—a slight that will certainly not be forgotten. “We have had a stable democracy over the last several years, a very clear and transparent democracy,’’ foreign minister Dr A.K Abdul Momen said. “Free and fair voting is happening.”

Taiwan has been invited—which has ensured that the summit instead of looking inclusive seems to be targeted against China—a move that might help America win friends especially as smaller countries might find it hard to stand up to Chinese displeasure. America has also not invited Sri Lanka, Singapore, Thailand and Vietnam.

Meanwhile, China has unleashed a propaganda war on America as it was kept out of the summit, releasing a white paper titled, “China: Democracy That Works’’ was released.

“China’s whole-process people’s democracy is not the kind that wakes up at the time of voting and goes back to dormant afterwards,’’ Vice Foreign Minister Le Yucheng has been quoted as saying.

For India, however, the invitation, as well as the singling out of Prime Minister to Modi, is certainly an acknowledgement of the role the country can play.