Sitting on a tinderbox: There is a deeper story to the anti-Hindu riots in Bangladesh

The tale of Bangladesh goes far beyond double-digit growth figures 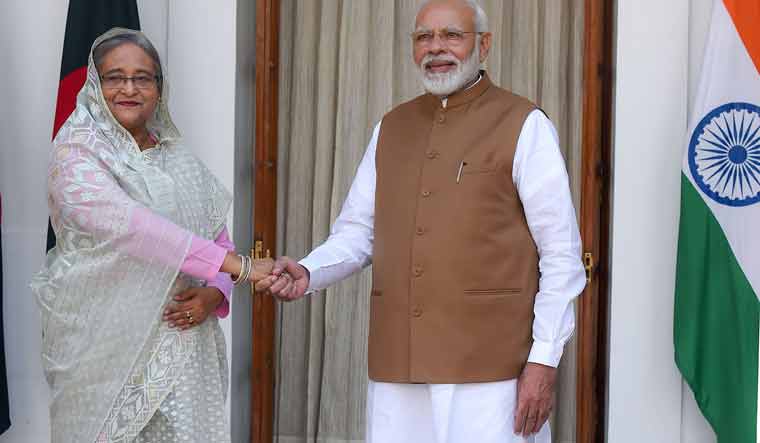 Bangladesh is once again in the spotlight for alleged torture of its minorities—the Bengali Hindus. This is not the first time that aggression against minorities is being reported in Bangladesh, one of India’s most volatile neighbouring countries. For the last five decades, the population of Hindus living in Bangladesh have gone down from 25 per cent to a miniscule seven per cent. What made the attacks headline-worthy this time was the violence faced by international organisations like ISKCON and Ramakrishna Mission. Ramakrishna Mission is in the hearts and minds of even elite Bengalis. So, this time, even intellectuals of West Bengal are on the streets, protesting. The UN and the US have also condemned the attacks on Hindus. But, the issue is not so simple. It needs to be delved into deeper.

The minority persecution has been ongoing in Bangladesh, ever since the gruesome murder of Mujibur Rahman, the father of the nation, in 1975; however, this time, India has expressed a full-throated condemnation, not just from the 'nationalist' BJP, but from almost all political outfits. However, West Bengal Chief Minister Mamata Banerjee, so far, has refrained from making any statement.

India’s outburst was more calculated and reactive this time as it never expected such incidents under the rule of Sheikh Hasina, daughter of Rahman. Be it Hindu or Muslim, Indians could not digest the fact that under the rule of Hasina, who was sheltered by the Indian government for decades after her father was dethroned and murdered, Bengalis could kill Bengalis in Bangladesh based on communal passion. Scores of Hindu Durga temples were vandalised, more than 150 houses of Hindus were reduced to ashes in different parts of Bangladesh, including Noakhali (where Mahatma Gandhi visited before independence to control communal violence), Kushtia, Coomilla, and Cox's Bazar.

Hasina’s statement on the occasion of Durga Puja came as a shocker for India as well. She cited some communal incidents in India, hinting at Assam, as having an influence on the deteriorating law and order situation in Bangladesh. In one way, Hasina’s comments highlighted a clear admission of fact that she would be unable to contain the radicals unless India helped her.

Recent internal security reports of Bangladesh have stated that the country houses several homegrown radical groups, despite the fact that the Hasina government has cracked down heavily on terror groups. According to the same reports, the rate at which Bangladesh has gone radical is the highest in South Asia. In fact, it ranks higher than even Pakistan in that metric. And with radicalism came more attacks on minorities, including Hindus. Said a former minister of the Hasina government: “I can tell you that Prime Minister Narendra Modi is as unpopular in Bangladesh as in Pakistan, if not more.”

He is not perhaps wrong. When Modi went to Lahore to meet then prime minister Nawaz Sharif, not a single Pakistani leader protested. But, his visit to Bangladesh, and prayers and puja at Oraikandi, was followed by violence on a massive scale. Railway stations were set ablaze, along with buses and other public utilities.

Contrary to public perception, more Bangladeshi youngsters went to Syria as mujahideen when compared to any other nation in South Asia. Also, the man who used to run Islamic State’s online portal and publicity wing was a Bangladeshi-Canadian.

The pace of radicalism in Bangladesh therefore matched its economic growth, which has hit more than double digits in the last decade of Hasina’s rule. Questions now arise: Why has Hasina failed to remove the tentacles of radicalism from Bangladesh? Even if the Jamaat-ul-Mujahideen Bangladesh (JMB) or neo-JMB (with IS links) was eliminated partially, they would resurface in different names. Jamaats in Bangladesh, a political outfit which supports pro-Pakistani Razakars and Hefazat-e-Islam (all of them had opposed a separate nation of Bangladesh in 1971), have been eliminated through war tribunals; however, the new generation clerics in Bangladesh propagate anti-Indian slogans across the country through video messages using social media. The Hasina government did little to contain them fearing the anti-incumbency factor. Also, such maulvis and clerics enjoy support of a section of the Bangladesh army, which her government understands very well.

One of the most susceptible politicians in the world, Hasina escaped around 22 assassination attempts in her life while being an opposition leader, and during her first term as prime minister in the 90s. So, the officials looking after her security cover would never take any risk and antagonise the semi-radicals in the country, and make her more vulnerable. While her model of governance is to crack down on armed rebels, the Bangladesh prime minister adopted a much softer approach towards unarmed religious radicals, trying to convince them to accept Modi as the political face of India. She often publicly praised Modi for his support for a developed Bangladesh.

But, that effort is so far unattainable and not fully successful. While old maulvis are trying to tread the middle path, the younger ones spew venom against the Indian prime minister. They consider Modi and RSS as an “enemy of the Muslims in South Asia”, much like what the prime minister of Pakistan, Imran Khan, has openly stated. Mamunul Huq of Mohammadpur in Dhaka was arrested in April this year for venomous speech against the Indian government. He was a cleric as well as a secretary of the Hefazat-e-Islam. The most striking arrest happened a few months back when a young boy, Rafikul Islam Madani, who uploaded a series of videos against the Indian prime minister, was arrested. The grooming of Rafikul in a homegrown madrassa in Dhaka symbolises the fact that Hasina’s crackdown on terror groups has cut the branches of a poisonous tree, but the root of the tree itself is there.

Hasina has understood the dangerous direction her country is heading towards. And, Bangladesh’s politics is solely dependent on India’s policies and programmes. A little intolerance in India makes the situation difficult in Bangladesh. The series of events which took place in India, mainly the recent attacks on Muslims in Assam, along with the NRC, made Hasina sit up and condemn, so that such incidents do not create further trouble in her country. She has arrested clerics over hate speeches, but none of them could be kept in jail as laws allow bail for such speeches. So, Hasina’s appeal is seen more as to contain problems in her own country, rather than shielding the offenders in Bangladesh. In fact, more than 1,200 FIRs have been lodged at different police stations in Bangladesh over the anti-Hindu violence.

Also, some believe that through such a critical statement, she sent a message to India on her old demands. Apart from security support, Bangladesh had been claiming a share of Teesta water, and the handover of a number of criminals and terror leaders hiding in West Bengal. The Union government is unable to convince the Bengal government to trace the terror suspects who have sneaked into India. The list is still with the Union home ministry. While the Modi government handed over Mujib's killers who were hiding for long, it needed to send many others, and for that it required help from the West Bengal government. The Teesta water treaty was also held back due to Mamata Banerjee’s opposition.

Notwithstanding such policy delays, Bangladesh feels that the image of the prime minister will have to be made more acceptable. Since 2014, the Bangladesh government considers PM Modi as the most effective Indian prime minister after Indira Gandhi, who assisted the nation on every front, be it security, building infrastructure or raising trades and business relations to a new level. But, the Indian government would also have to accept the fact that hardliners in Bangladesh are as dangerous as they are in Pakistan. Long years of army rule got Bangladesh closer to Pakistan, which Rahman never wanted to happen. Hasina’s task is never going to be easy, and cannot be attained quickly even if she wishes. It requires long-term policies, both from India and Bangladesh, to create confidence-building measures between the two nations. What can make that successful is people-to-people contact, and engagements, bilateral cooperation in the fields of culture, sports and entertainment. While Kolkata and Dhaka are linked culturally, such a tie is non-existent between Dhaka and other parts of India.

The fear of NRC has made the Bangladesh government nervous. People holding high offices used a certain language against Bangladeshis. While Subramaniam Swamy's prescription was to attack Bangladesh in the wake of violence against Hindus, Suvendu Adhikari, West Bengal’s leader of the opposition, went along the same line and visited the Bangladesh deputy high commission office. He said: “If the violence is not stopped, we will show our strength at the border in north Bengal and south Bengal.”

Such manifestations of nationalism against a crisis-ridden neighbouring country will never work. India has to understand that if Hindus or other religious minorities are to be protected in Bangladesh, Sheikh Hasina is the only leader capable of doing that. If she or the Awami League fail, Bangladesh would fail as a country. So, instead of clamping down heavily on the Hasina government, what India requires is the creation of confidence-building measures. And, why not? If India can do that with China, and PM Modi could do that in the US or West Asia, then why not with Bangladesh, the country it created fifty years back?