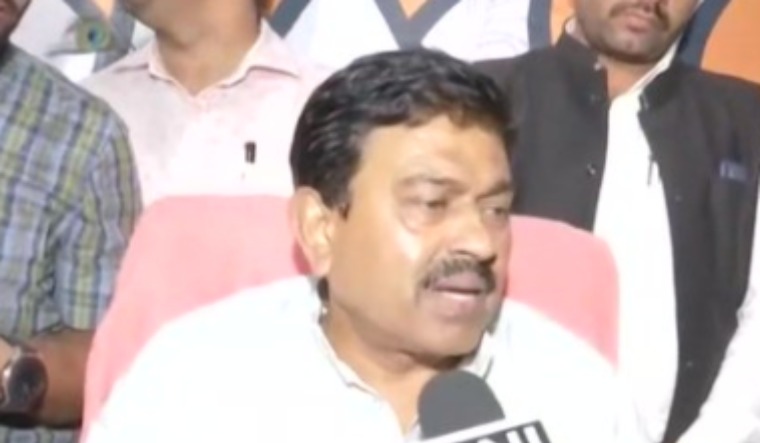 BJP leader Ram Iqbal Singh, on Thursday, accused Union minister Ajay Mishra of being behind the Lakhimpur violence and urged Prime Minister Narendra Modi to remove him from the post.

He said that questions are also being raised against the prime minister for not sacking the minister.

Singh alleged that Mishra was behind the Lakhimpur violence, and added that his "threatening statement" added fuel to the fire. "He should have apologised to farmers but he only tried to defend his son. He has not regretted the incident yet. This incident is a blot on humanity," Singh, BJP state executive member, told reporters.

"His son crushed farmers to death under his car. He was arrested after the intervention of the Supreme Court, but even today the minister is sitting on the chair. In such a situation, Prime Minister Narendra Modi should sack him immediately," he said.

In response to a question, Singh said that the image of the BJP government has been "tarnished" by the Lakhimpur incident and the Gorakhpur businessman murder case.

He said BJP workers have also been killed in the Lakhimpur incident and the government should also take care of them.

"Activists across the state are angry due to the callousness of the government on this incident. Like the farmers, the government should also provide financial assistance to the relatives of the deceased workers and a job to their family members," he said.

The former MLA claimed that the condition of dedicated party workers in the BJP has become like a "bonded labourer".

The BJP leader has been criticising the government through his statements.

He had earlier said that bureaucrats are running the government in the state and had also raised a question mark on handling of the second Covid wave by the Yogi Adityanath government.

Eight people died in the October 3 violence and of them, four were farmers, allegedly knocked down by a vehicle carrying BJP workers.

Farmers claimed that Union minister Ajay Mishra's son Ashish Mishra was in one of the vehicles, an allegation denied by him and his father who say they can produce evidence to prove he was at an event at that time.

Ashish Mishra 'Monu' was arrested in the case on October 9 after 12 hours of questioning, and a court has accepted his police custody from October 12 to 15.