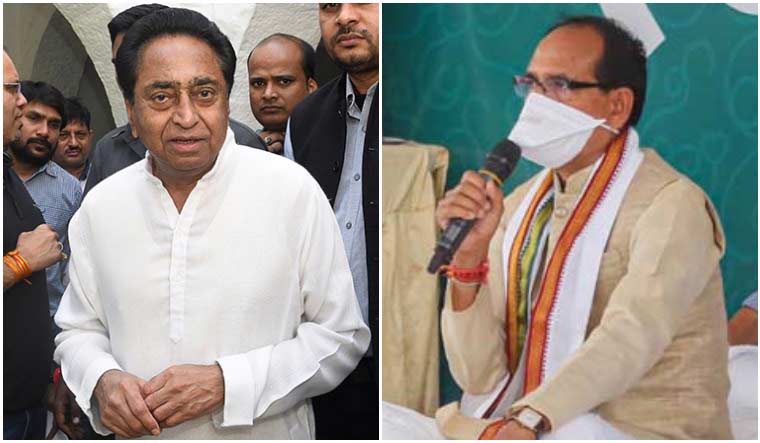 After a volley of tweets by former chief minister Kamal Nath, attacking the Madhya Pradesh government on various issues during the past two days, Chief Minister Shivraj Singh Chouhan retorted saying the Congress revels in troubles of the people.

To a question on Tuesday on a tweet by Nath over an alleged malnutrition death of a one-year-old girl in Shivpuri district, Chouhan said, without naming Nath, that whenever there is some crisis in the state, Congress leaders feel pleasure.

“These people are those who just await an opportunity of some (bad) incident. If there is flood, they are happy. If due to water logging or other reasons, coal mines do not work to their capacity and a crisis seems to loom, they become happy. They are not concerned with the problems of the people. Rather, when people are in trouble, they feel happy. They don’t do anything, they just keep on tweeting. They have nothing to do with the issues of the people,” Chouhan said.

The chief minister also said the power/coal supply status was fine in the state and there will not be any crisis.

In the past two days, Nath has been tweeting about several issues, including the looming power crisis due to reported coal shortage in the state, the alleged loot of fertilizers in Morena by farmers agitated over short supply, suicide of a farmer in Chhindwara allegedly due to crop damage, death of a malnourished infant girl in Shivpuri, rape of minor in Rewa and gangrape in Bhopal.

After Chouhan’s comment, Kamal Nath tweeted again on the coal shortage issue, saying he had hoped that the CM would reply to his earlier questions on the coal and power crisis, but he (CM) came out with lies to claim that there was no such crisis in the state.

“Shivraj ji, you are the head of the state and in a responsible post and you should be acquainted with the factual position in the state. How much stock of coal should be available in the thermal power stations, what is the current stock, how many days would it last, how much payment (to coal suppliers) is pending, how many (power generating) units are closed due to coal shortage, how much is power generation impacted due to this shortage, what is the current power demand in state and what is the power generation position, how much power is being purchased from whom and at what rate? You should know the truth about all these questions and convey the answers to the worried people. But you are lying that there is no coal or power crisis in the state. This is a joke and cheating with the 7.5 crores people of the state,” Nath said in a series of tweets.

There have been reports of a looming power crisis in the state with the four major thermal power stations having the coal stock for just four days as on Tuesday. There are reports that the power stations are working at a low capacity to save coal even as the state government is trying to get more coal. It was reported that a unit of the Sanjay Gandhi Thermal Power Station had been closed down due to shortage of coal. The government has been claiming that the situation would be managed and power crisis would be averted.