‘Driver may have made a judgement of error’ 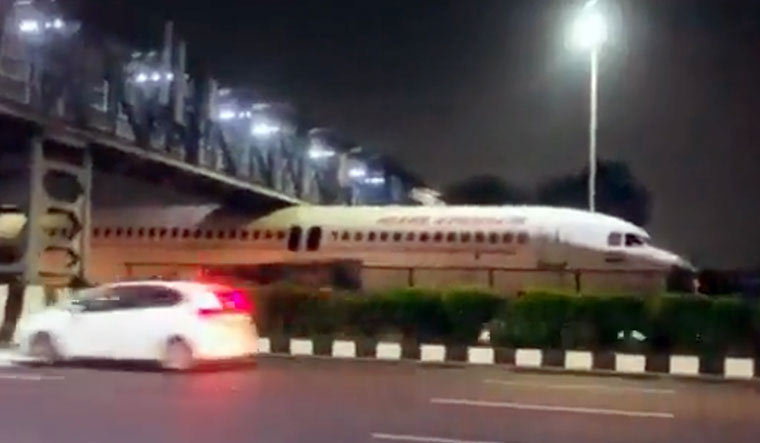 The internet absolutely loves it when things get stuck under bridges. More specifically, when things too big to pass safely under a bridge are driven underneath one anyway—only to get trapped underneath.

The premise of the 11foot8 subreddit is precisely this: The page is filled with videos of trucks, lorries and other vehicles scraping their roofs or getting stuck altogether underneath a notorious low-hanging overbridge in Durham, North Carolina. It makes for surprisingly therapeutic viewing. Now, adding to this schadenfreude is a clip from India, where a former Air India passenger jet has gotten lodged  underneath a New Delhi overbridge.

Viral images of the incident have taken over Twitter. In the video, taken at night, an Air India-branded jet, sans its wings, can be seen stuck underneath an overbridge near the Indira Gandhi International Airport in New Delhi.

#WATCH An @airindiain plane ✈️ (not in service) got stuck under foot over bridge. Can anyone confirm the date and location?
The competition starts now👇 pic.twitter.com/pukB0VmsW3

An Air India spokesperson told Times of India that the plane had been scrapped and no longer belonged to the company. “The aircraft certainly does not belong to the Delhi airport’s fleet and in the video, it is being transported without any wings. It appears to be a scrapped plane and the driver may have made a judgement of error while transporting it,” the spokesperson said.

This is not the first time a plane has been trapped underneath a bridge in India. In 2019, another Air India-branded plane was spotted trapped beneath a bridge in Durgapur, West Bengal. That plane, a Boeing 737-200, had earlier served with India Post before being discontinued from service.

While such large aircraft may appear to have no reason to exist on Indian roads, the government plans to develop emergency landing facilities capable of being used by the armed forces in 19 more places in the country. Earlier this year, a Hercules C-130K transport aircraft carried a mock emergency landing on National Highway 925.