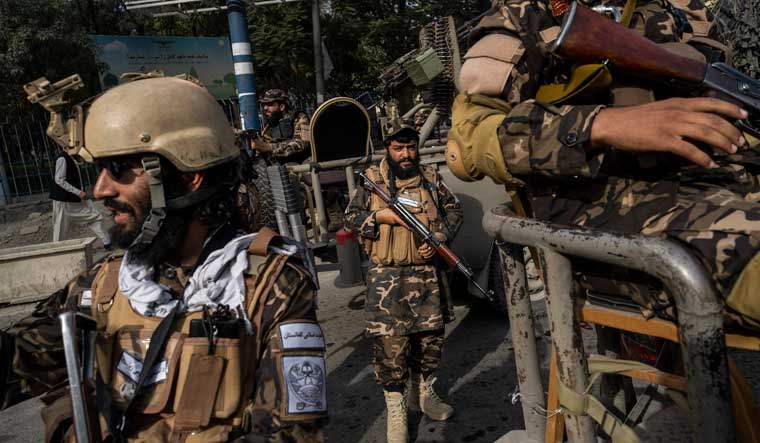 Fighters of the Haqqani Network in Kabul | AP

As the leadership in Afghanistan has transitioned with the takeover by the Taliban, Interpol has written to all law enforcement agencies, spelling out the challenges they will confront when they engage with the Islamic emirate.

While promises were made during the Taliban's press conference that Afghanistan would not harbour terrorists, Interpol said there are reports that indicate al Qaeda leadership still resides in the border region of Afghanistan and Pakistan.

Moreover, in their campaign to overthrow the Afghan government, the Taliban released thousands of prisoners, including many al Qaeda operatives.

The Interpol report, seen by THE WEEK, has raised an alarm over senior members of Taliban and their sub-groups still maintaining important ''alliances'' with al Qaeda.

''Among them is the Haqqani Network, a militant group headed by Sirajuddin Haqqani, who is part of the Taliban leadership. Haqqani reports directly to the Taliban Supreme Council but remains semi-autonomous. This network is the main conductor of the relationship between the Taliban and other foreign terrorist groups, mainly al Qaeda,'' it said. It also has technical skills, like making explosive devices, and is able to plan and execute complex attacks, it added.

This particularly becomes worrisome as Pakistan has been supporting the Haqqani Network and can use it to create more trouble for India in carrying out terror activities, said a security official.

According to latest figures with Interpol, there is a notable increase in the percentage of attacks committed by terror groups, including unknown terrorist networks in last two-and-half years from 2019 up to June 21, 2021. This comes as a security nightmare for the region since besides al Qaeda, there are other terrorist groups present on Afghanistan soil like the Islamic State in Iraq-Levant-Khorasan, Tehrik-e-Taliban Pakistan and The Islamic Movement of Uzbekistan. The presence of these groups and others contributes to the volatility of the security situation, said Interpol.

Interpol has warned that ISIL-K will take a more militant form than the Taliban alone and more lethal attacks, like the Kabul airport attack, against the Taliban and the civilians in Afghanistan are likely.

The Interpol analysis further focuses on violent extremist organisations getting a new lease of life across the political spectrum in the near future. It warned that groups motivated by Islamic extremism will view the Taliban's comeback as proof that violent jihad is an effective means to accomplish their goals.