Modi will turn 71 on Friday 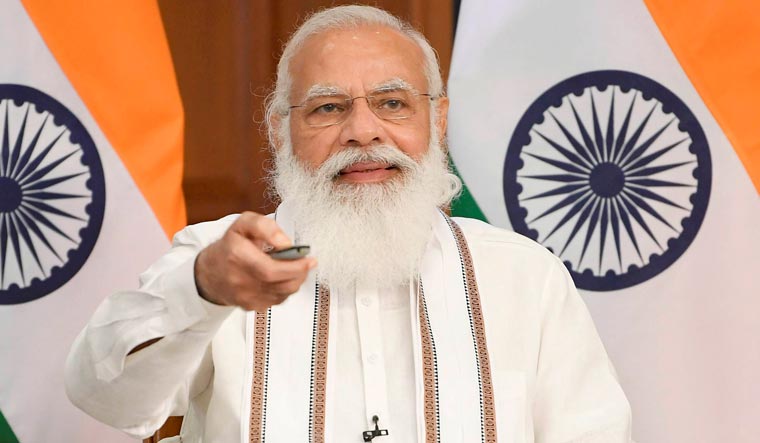 Prime Minister Narendra Modi will turn 71 on Friday. The BJP will mobilise its cadre to mark the event across the country with series of events, ranging from distributing free ration with PM's pictures to sending him postcards, blood donation camps to special prayer meetings, to setting a new vaccination record.

In fact, the celebrations will run for 20 days to mark Modi's 20 years in an administrative position. He became Gujarat chief minister on October 7, 2001. BJP chief J.P. Nadda will begin the programme titled Seva aur Samarpan Abhiyan, from BJP headquarters in Delhi.

The Union health ministry will try to create a new vaccination record on the day to mark the occasion. The ministry of culture will launch the auction of gifts received by Modi as PM. The memorabilia includes sports gear and equipment of the medal-winning Olympians and Paralympians, replica of the Ayodhya Ram Mandir, Chardham, Rudraksh Convention Centre, models, sculptures, paintings, angavastras, among other things. The proceeds from the e-auction shall go to the Namami Gange Mission - aimed at conserving and rejuvenating the Ganga.

The Namo App will launch an online exhibtion covering Modi's journey, struggle and programmes initiated over the years to “transform” the country and his state Gujarat.

The massive programmes across the country will act as BJP and government's outreach to people. The programme is aimed to help the party communicate to the people, aspects of Modi's leadership and help the party tide over negative sentiments due to the COVID-19 pandemic-induced distress.

The BJP's state units across the country have chalked out special programmes to mark the occasion which will include holding functions at the booth level, particularly in the poll-bound states. While, in Varanasi, some 71,000 lamps will be lighted, Madhya Pradesh has decided to set up 1,070 Narendra Modi (NaMo) parks in all the blocks of the state for the occasion.

Even the different morchas of the party will hold their separate programmes. The women morcha will hold programmes for the women, hold medical camps, distribute vitamins and launch 'healthy women, healthy India' campaign; the Kisan morcha will celebrate the day as Kisan Jawan Samman Diwas to honour Army men and their families and highlight the work done by the government for the farmers. The party's youth wing, BJVM, will hold yatras and blood donations camps as part of Nav Bharat Melas.