AIUDF's Ajmal warming up to CM Sarma behind collapse of Congress alliance in Assam? 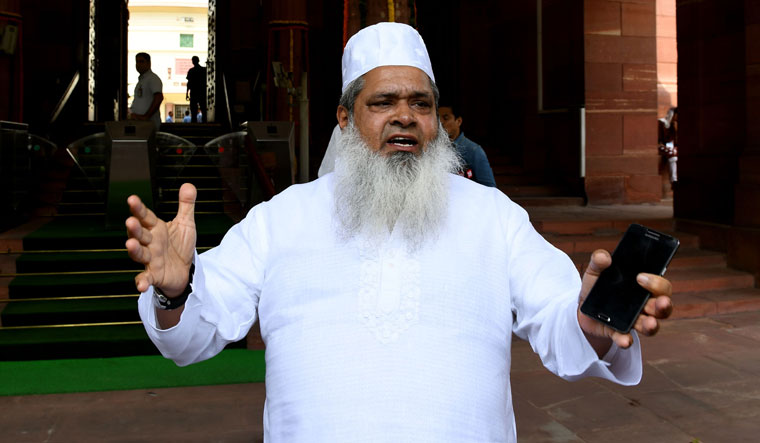 Congress severing ties with the AIUDF and the Bodoland People’s Front (BPF) is set to create a new political storm in Assam, the largest among the seven northeastern sisters. While the Congress has accused AIUDF chief Badruddin Ajmal of playing in the hands of Assam BJP, the AIUDF has countered saying, “The Congress has demolished the chance of building an anti-BJP coalition in Assam."

Senior Assam Congress leader Debabrata Saikia told THE WEEK, “AIUDF leaders were openly saying that Himanta Biswa Sarma is the best chief minister Assam has ever had. Same with BPF leaders. How could we stay with them anymore?”

However, Saikia has not ruled out future alliances. “Let us cross the bridge when time comes,” he said.

Congress sources said the Union government had begun an investigation against an NGO run by Ajmal. The home ministry has found that the money deposited into Ajmal’s NGO account has come from foreign nations, funding terror activities in many Asian countries. While Ajmal had rebuked the BJP government at the Centre for trying to mute his political voice in Assam, the Congress said the MP has become closer to Sarma once he became the Assam chief minister.

“He is afraid of hitting the streets anymore against the BJP. He could be a big liability for us in the coming days. In fact, he is cooperating more with the Assam chief minister these days,” said a Congress MP from Assam. The leader demands the decision to break the alliance with Ajmal’s party is unanimous, but the AIUDF has contested the claim. Ajmal, a perfume baron who mostly stays in Mumbai, was not available for comment.

However, the party general secretary Aminul Islam decried the allegations. “This is a bogus allegation by the Congress. Ajmal saab is one of the most secular characters in the country. He does not harm anybody, and is very cordial in nature. That does not mean that he is getting closer to the Assam chief minister. In fact, Congress’s decision to break the alliance was not unanimous. Only a section wanted it and they helped the BJP by doing it," he told THE WEEK.

Congress Lok Sabha MP Ripun Bora said the state core committee had recommended breaking up the alliance to the high-command in Delhi. "It is up to the high command to make the final decision. Let us wait for their decision," Bora told THE WEEK.

He, however, said the Congress tried hard to keep the alliance. "But it was too difficult for us as the BPF has itself decided to go with the BJP and the AIUDF decided to have friendly relations with the saffron party," he said.

Meanwhile, the AIUDF alleged that some Congress leaders and prominent rights activist, Akhil Gogoi, helped the BJP during the assembly election this year. “If there was a total Mahagathbandhan in Assam, the BJP would have been ruined in Assam. But Gogoi entered into an agreement and fought the election on his own. It damaged the alliance in many seats,” said Islam.

Gogoi has had two meetings with West Bengal Chief Minister Mamata Banerjee in Kolkata regarding TMC’s plans in Assam. The AIUDF is aware of the meetings. The TMC has also inducted Sushmita Deb, a prominent Congress leader from Silchar, giving a clear message that Banerjee would like to step into Assam.

At the same time, the AIUDF thinks the TMC is too small a factor in Assam, even as it admitted that Banerjee has a secular character. “(The) TMC would need us rather than we need them. It does not even have a party office in Assam. But yes, since Mamata Banerjee is a secular leader, we might think of an alliance with her. But everybody has to understand that neither Ajmal saab nor the Congress alone could defeat the BJP at this stage. Assam requires a grand alliance to beat the BJP in Assam,” Islam added.