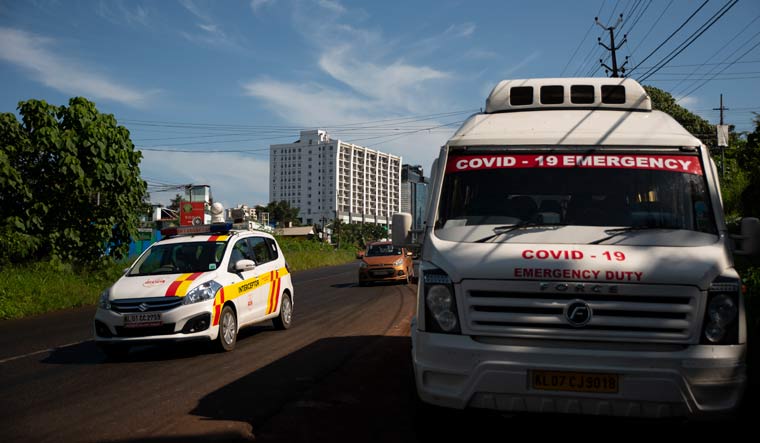 A Central team that went to Kerala, in its report to the Union health ministry, has said contact tracing of COVID-19 patients in the state is low, home isolation guidelines are not being followed and the number of tests conducted to detect the infection is showing a downward trend.

According to official sources, the report pointed out that people are becoming more complacent regarding COVID-appropriate behaviour and highlighted the need for ramping up vaccination.

To increase the number of districts to be covered, the team members who reached Kerala on August 30 were divided into two groups—one for the southern districts and another for the northern districts.

According to the observations by the second group, the trajectory of cases is on an upward trend with a test positivity rate (TPR) of 17.26 per cent. There is no active surveillance or notified containment zones with perimeter control and the testing is declining with an RT-PCR-RAT ratio of 20:80.

"The case-contact ratio is 1:1.5, which is abysmally low. More than 90.12 per cent of the COVID patients are under home isolation, and the guidelines on isolation and quarantine are not followed. There is a limited monitoring of the prescribed parameters to identify early warning signs," an official source quoted from the report.

The vaccination coverage for the eligible population is low compared with the other districts, the report stated.

According to the observations made by the first group, containment and micro-CZs are not made according to established GoI guidelines and in most cases, there are no surrounding buffer zones.

Most category-A patients prefer home isolation. However, in many instances, proper quarantine practices are not followed by these patients, due to which intra-house transmission is high and this may be leading to the formation of clusters, the report stated.

According to the report, the death audit is being conducted for all fatalities suspected due to COVID-19. However, deaths are reported in the state bulletin on the day the audit is completed rather than on the dates when they occurred.

It was indicated by state officials that due to effective home isolation and containment strategies after the first wave of COVID, the population remained largely unexposed.

This was also suggested by a recently conducted sero-surveillance study by the ICMR. Kerala occupied the last rank in the study, with only about 44 per cent of its population showing antibodies against COVID.

The Central team has recommended that the strategy of categorising panchayats needs to be re-examined, and RAT testing at an expanded level should be implemented.

The number of RT-PCR tests also needs to be increased.

The number of contacts traced per case should also be increased, according to the recommendations.

A system to put the entire house under quarantine may be followed. Notably, the family members of the patients should not be allowed to move out freely when their reports are due, the recommendations stated.

The option of a 14-day lockdown in wards showing a high TPR for a long time should be explored, the team has recommended.

To flatten the curve, the reproductive number should be brought down to 0.95 or lower through effective containment and control measures, and containment zones need to be defined and notified on the basis of mapping of cases and contacts.

Active surveillance in the containment zones needs to established and the principle of "test-track-isolate" needs to be followed, the recommendations said.

The case contact ratio has to be at least 10-15 contacts for every case. Clusters and super-spreader events, whenever suspected or reported, should be investigated by the district-level RRT.

The report mentioned that Malappuram district needs to ensure strict compliance of the home isolation guidelines. Home isolation should be permitted only if the prescribed conditions of necessary space requirements are met. Monitoring of the clinical status, and in particular oxygen saturation, needs to be strictly followed.