Every democracy is a 'work in progress', says Blinken in Delhi 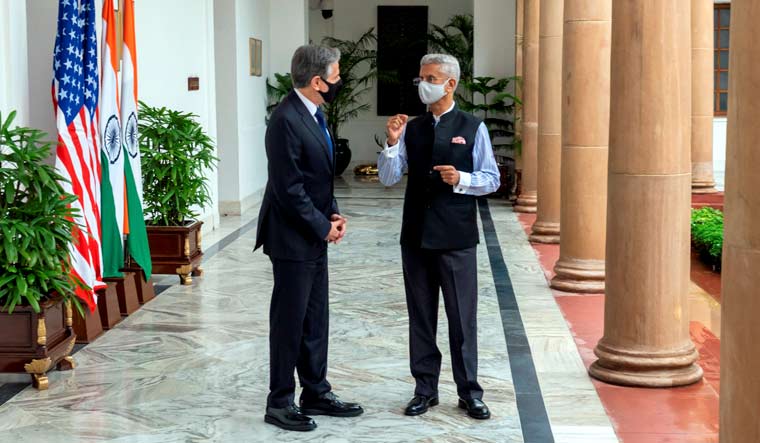 External Affairs Minister S. Jaishankar with US Secretary of State Antony Blinken during their meeting in New Delhi | Twitter/PTI

Covid, climate and Quad formed the common ground between India and the US during US secretary of state Antony Blinken's visit to New Delhi, even as they navigated through the difficult waters of human rights, a political issue with the US in its outreach with the world.

Blinken managed to walk the talk on the last issue without raising the hackles of India, which is always touchy when other countries raise issues about India's “internal matters”. He said at the press briefing that “shared democratic ideals were part of the conversation as they usually are.'' He took the bite out of the topic by noting that every democracy, starting from the US, was a work in progress, and said that they had seen challenges in the past and continued to do so. He noted that the relationship between the two countries was strong because it was a relationship between shared democracies.

Jaishankar was more forceful and asserted that the “quest for a more perfect union applies to the US, India and all democracies'' and emphasised that  all democracies are obligated to right wrongs, even those done historically. He stressed that one should not “equate freedom with lack of governance or non-governance, they are different things.''

The US government has been careful with its language, but US lawmakers, in their individual capacities have hit out at India in the past for the curbs in Kashmir following the lifting of its special status, the new citizenship laws and even the new farmer laws. On an earlier visit to the US, Jaishankar called off a meeting with Indian origin lawmaker Pramila Jayapal as she was vociferous on the curbs in Kashmir.

Earlier in the day, at a meeting with civil society representatives, too, Blinken was careful with his words, well aware that the visit might turn sour with one wrong turn of phrase. He spoke in generalities, noting that all people deserved to have a voice in their government, and be treated with respect, no matter who they were. He emphasised at that meeting too, how both countries shared commitment to democratic values. He spoke about rising global threats to democracy, but didn't pick out any incident or issue in India in particular.

Speaking on the Quad, Blinken termed it as a pooling of resources for global recovery from the pandemic, combating climate change and on maritime and security issues which will have a meaningful impact on the lives of our people, but said it was not a military alliance.

Jaishankar noted that “rebalancing means that countries whose capabilities have changed and are enlightened enough to work with each other will do so”. He said one must “get over the idea that other countries doing something is directed against them.”

Post Covid recovery and vaccine collaboration were topics on which they could talk openly, being largely in agreement. India was appreciative of the support and openness with which the Biden administration had kept supply chains open, which helped India ramp up vaccine manufacture, said Jaishankar, adding that this, too, was a work in progress.

The two noted that their views on Afghanistan were more in convergence, with both wanting to see an independent, democratic Afghanistan. Jaishankar noted that the gains to Afghan civil society over the last two decades were self evident and emphasised that Afghanistan should not become a home to terrorists or a source for refugees.