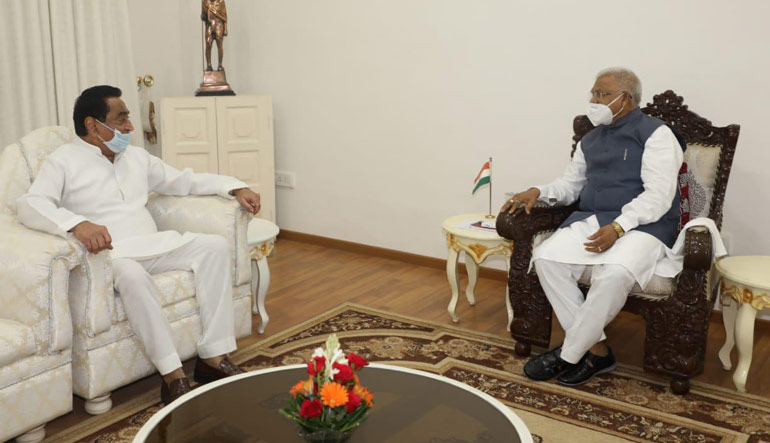 Later, speaking to the media, Nath said he apprised the governor of the situation in the state, especially in the context of the persecution of the Dalit and tribal population, saying there have been been several instances of violence unleashed upon them.

Kamal Nath’s statements pertained to the recent incidents, including the murder of five of a tribal family in Nemawar of Dewas, and the public assault and shaming of tribal women by their own family members, among others.

“The governor has a long experience of social work among the tribal people. So I have requested him that his efforts and priority should be safety and security of SC/ST population,” Nath said while speaking to the media.

He said he also told the governor that every section of the society, such as farmers and small traders, have been facing troubles in the state. Youth are unemployed, and unemployment is only rising, the economy is in doldrums and economic activities have come to a standstill, he pointed out.

On the questions on preparations for impending civic body polls and by-polls, he said he will be touring the entire state as he is now healthy after being hospitalised for 11 days with pneumonia. He said he is constantly taking meetings of party leaders and workers and candidates will be announced at the right time.

As for the Congress returning to power in 2023, Nath said he had total confidence in the people of Madhya Pradesh that they will side with the truth.

‘Let’s see how the vehicle runs’

When asked about Jyotiraditya Scindia’s induction into the Union cabinet, Nath said it was a matter between Scindia and BJP and wished them happiness. When reminded about his (Nath’s) statement of asking Scindia to take to the roads and that now the latter has got respect from the BJP, Nath quipped “It is all okay, but let us see how the vehicle runs in the future.”

On the question of price rise, he said prices are out of control and one should remember the big speeches of prime minister Narendra Modi from 2013-14. “He would give big slogans on stand-up India, digital India and now where is it all. But now he has grown a beard and looks good,” Nath said.

Meanwhile, reacting to Nath’s meeting with governor over atrocities against SC/STs, the media in-charge of MP BJP, Lokendra Parashar, said it would have been well if Kamal Nath spoke the truth to the governor that the accused in the Nemawar murder case were linked to the Congress. He also said that Nath should have told the governor about incidents of atrocities during his tenure as CM, including burning alive of a Dalit person in Sagar, abduction and murder of two kids by dacoits in Chitrakoot and incident of farmers being beaten to death in Dhar. In all these cases, the Nath government failed to take any serious action and he (Nath) should have told this to the governor, Parashar said.