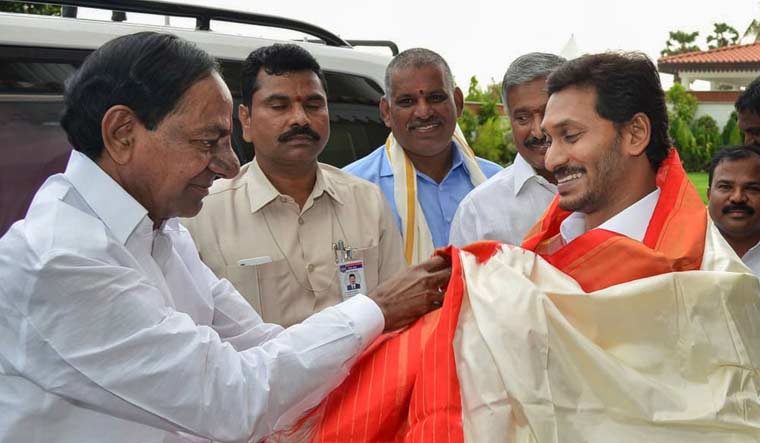 The latest flashpoint between Andhra Pradesh and Telangana governments, at best, can be compared to a popular sport, tug-of-war. The venue, Srisailam dam, is located on the border separating the two states. On the left side of the Srisailam reservoir is Telangana, and on its right falls Andhra Pradesh. The rope is, of course, the Krishna river. In the last few weeks, both sides have been accusing each other of pulling the rope harder than required.

Picture the same scenes at other irrigation project sites on Krishna river, Nagarjuna Sagar dam and Pulichintala project, which are on the downstream and also on the border.

After united Andhra Pradesh was bifurcated, water disputes became a thorn in the relations of AP and Telangana. Two major rivers, Krishna and Godavari, flow through the two states, and both the governments have been vying for handsome allocations to fulfil their domestic needs. The recent issue is related to the Krishna waters, which originates in Maharashtra and passes through Karnataka, Telangana and Andhra Pradesh, before culminating in the Bay of Bengal sea. There are six dams constructed on Krishna river in AP and Telangana. As per a temporary agreement, Krishna waters have to be shared between Telangana and Andhra Pradesh in the ratio of 34:66, or 299 tmc ft for Telangana and 512 tmc ft for AP.

Andhra Pradesh has accused Telangana of drawing more water from common reservoirs in Srisailam, Nagarjuna Sagar and Pulichintala projects and also Jurala for power generation and letting it go waste into the sea. In the last one week, AP Chief Minister Y.S. Jagan Mohan Reddy had written three letters addressed to Prime Minister Narendra Modi, Forest and Environment Minister Prakash Javadekar and Gajendra Singh Shekhawat, the Jal Shakti minister. The CM claimed that the Telangana government was violating protocols and depriving the right of the state to utilise its allocated water.

According to AP, Srisailam reservoir water cannot be utilised for power generation unless the water level is above 834 ft, but Telangana has been drawing water at 796 ft without letting the levels rise, making it difficult for AP to draw the allocated quantities. The AP has also accused Telangana of initiating multiple lift irrigation projects on it’s side without required permissions, further aggravating the situation.

While AP representatives have said Telangana was generating surplus power, the Telangana officials have maintained that they are operating their hydel stations at full capacity to general power for it’s various lift irrigation projects and also for the massive multi-purpose Kaleshwaram project.

Telangana government has also complained against Andhra Pradesh. Telangana has been opposing the Rayalaseema lift irrigation project and in this regard,CM K. Chandrashekar Rao had written a letter to Jal Shakthi Minister Shekhawat last year. As part of Rayalaseema lift irrigation project, the AP government wants to widen the canal on it’s side for improved flow of river water. The state's argument is that they need the Krishna water for the parched Rayalaseema region, consisting of four districts. However, citing the order of National Green Tribunal, Telangana has called the new projects on the Andhra side as illegal.

AP and Telangana government have complained to Krishna River Management Board (KRMB) while also accusing it of not doing enough to resolve the existing issues. Jagan Mohan Reddy wants the Centre to take over all common reservoirs in their control and Telangana CM wants the water allocation arrangement changed to 50:50 ratio.

Both sides want to intensify their demands in the near future.

The water wars, which have surfaced time and again, have had a deep impact on the politics of the region which also witnessed some tense moments.  A year after the bifurcation, in 2015, police forces of both AP and Telangana came to blows after trying to take control of Nagarjuna Sagar dam. Later, AP and Telangana increased security at common irrigation projects that are under control.

More recently, a few days back, Telangana and AP posted a large number of policemen near Srisailam dam and the Nagarjuna Sagar dam. In the midst of this, the relations between the two state governments have soured. In 2019, when the YSRCP, led by Jagan Mohan Reddy, came to power in AP, there was visible camaraderie between AP and Telangana chief ministers who met multiple times. There was also talk on resolving water issues back then. However, bitter words have been flying across the border in the recent past, with a Telangana minister accusing AP of “robbing water” and AP government accusing Telangana of  “whimsical attitude.”

Undoubtedly, the water issue will form one of the major factors in the run-up to the elections. And it has every chance of re-igniting regional emotions and influencing the voters.