Opinion of Congress workers and organisation will be important for UP polls: Priyanka Gandhi 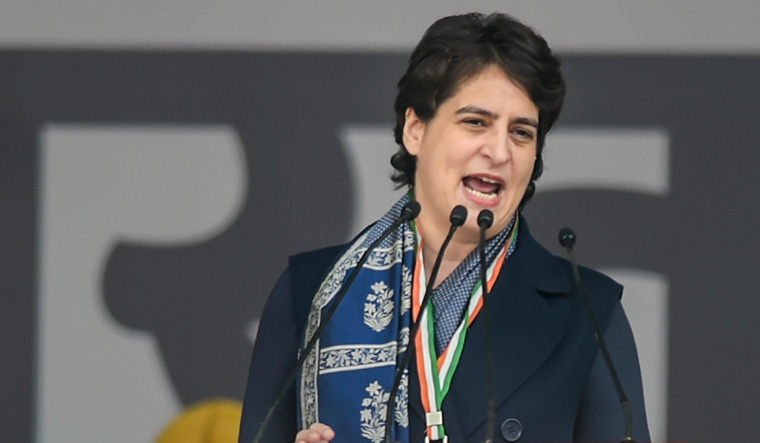 Months ahead of the 2022 Uttar Pradesh assembly elections, Congress general secretary Priyanka Gandhi Vadra, on Sunday, urged party workers to stand with people of the country, and share their pain and grief.

Addressing a two-day training programme of party workers of Lucknow and Mathura through video conferencing, the party's in-charge of the state said, "Congress party workers should stand with the people of the country, and share their pain and grief. For this, the work of building the organisation is most important."

In a statement issued in Lucknow on Sunday by the UP Congress, Vadra said Congress workers should stage a protest against the BJP government over inflation, unemployment, continuous increase in the price of petrol, diesel and cooking gas.

"The anti-people policies of the BJP governments at the Centre and in the state have to be unravelled. People are crying due to inflation, government jobs are falling prey to corruption and the candidates selected for jobs are moving from pillar to post to get appointments," she said.

Vadra also said that opinions voiced by the organisation and that of the workers will be very important for the Assembly elections.

"During the COVID-19 pandemic, the way in which Congress party workers helped the migrant workers, arranged oxygen cylinders, concentrators, medical kits and ration kits, I want to convey my thanks. The Congress always derives unseen power from serving humanity during emergency. This shows our association with the interest of the public," she said.

"The Congress will never leave people in the lurch, and this is our mantra of inspiration," Vadra said adding that the party workers should stay firm on the path of ''seva satyagraha''.