MP: Only 18k of over 5.31 lakh eligible under Ayushman Bharat got free COVID-19 treatment

Only 6.05 lakh of 1.42 crore eligible got free treatment across India 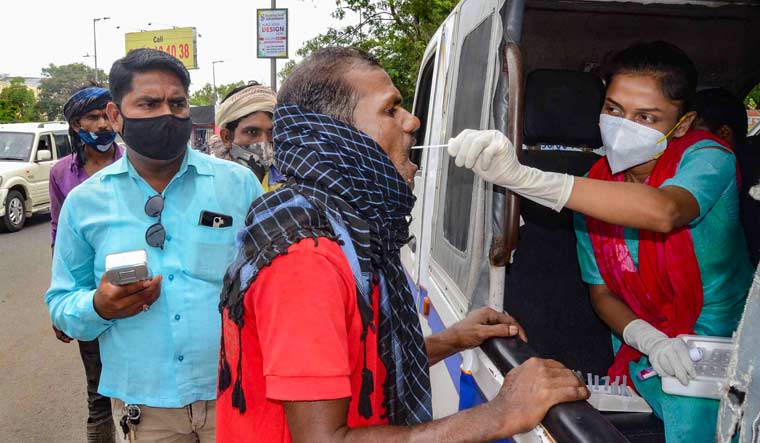 Only a minuscule number of beneficiaries of the much-touted Ayushman Bharat scheme of the central government could get the benefit of COVID-19 free treatment, going by figures accessed through a Right to Information (RTI) request by an activist in Madhya Pradesh.

Across the country, only 6,05,308 persons received the benefit of the scheme between March 2020 and the first week of June 2021, while in Madhya Pradesh the number of such beneficiaries is a mere 18,304, the RTI reply by the director of the National Health Authority (NHA), shows.

Apart from this, 17,73,484 persons across the country and 2,656 in Madhya Pradesh got free testing benefits under the scheme, the reply shows. 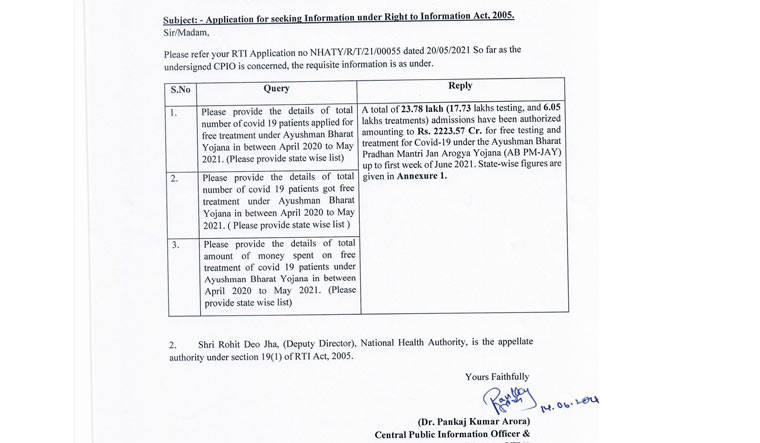 The RTI response from the National Health Authority | Vivek Pandey

The NHA is the nodal agency of the PM Jan Arogya Yojana (PMJAY), a component of the Ayushman Bharat scheme. The RTI reply was accessed by activist Vivek Pandey of Rewa in Madhya Pradesh recently and shared with THE WEEK. 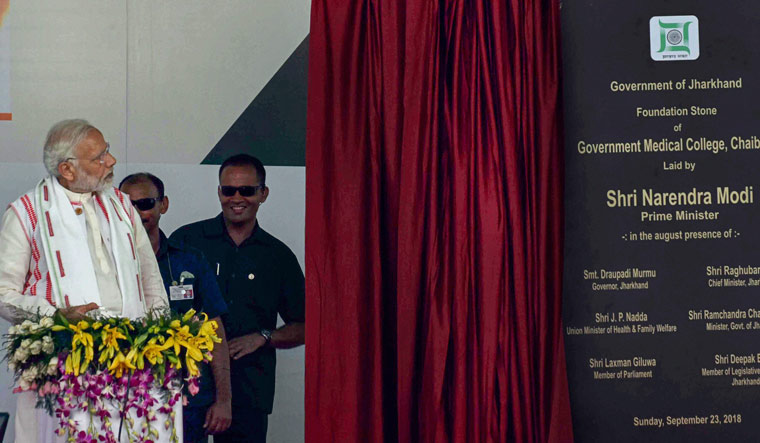 An analysis by THE WEEK shows that these figures translate into a mere 4.2 per cent and 3.4 per cent of the actual PMJAY beneficiaries who tested positive for COVID-19 infection, in India and Madhya Pradesh respectively. The PMJAY provides for free treatment to eligible persons in case of hospitalization.

The analysis by THE WEEK is based on the number of total beneficiaries of the PMJAY and the number of COVID-19 positive cases available on official records. 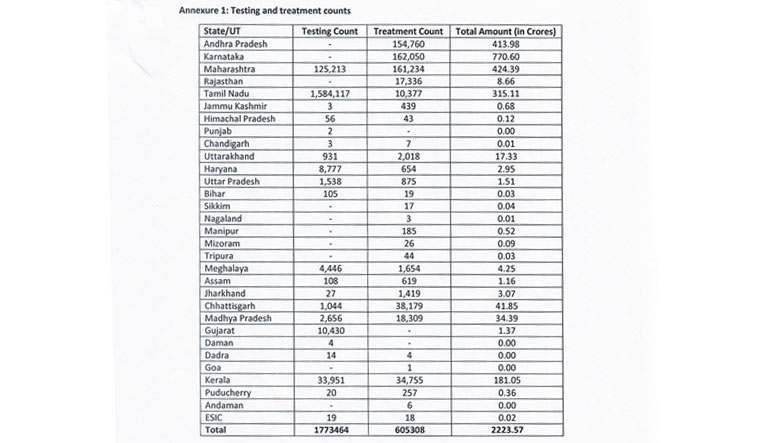 The testing and treatment counts, from the RTI response by the NHA | Vivek Pandey

According to the NHA website, the current number of PMJAY beneficiary families across India is 13.44 crore. This translates roughly into about 66.2 crore individual beneficiaries going by the figure of 4.93 persons per family, according to a written reply by the minister of state for health and family welfare Ashwini Kumar Choubey in the Rajya Sabha on February 9, 2021 (approximately 65 crore beneficiaries of 13.17 crore families).

This means that approximately 47.6 per cent (66.2 crore of the 134.4 crore projected) population of the country is covered under the PMJAY. If the COVID-19 positive cases figure of over 2.99 crore cases is collated with the beneficiary figure, the number of COVID-19 patients who are PMJAY eligible comes to about 1.42 crores (47.6 per cent of 2.99 crores).

As the RTI figure shows that just over 6.05 lakh got free treatment, it means that only 4.2 per cent of the PMJAY eligible persons benefitted from the much-touted scheme.

On other hand, the number of persons getting the benefit of free treatment for COVID-19 is merely 18,309, which comes to just 3.4 per cent of the eligible persons. On average, 30 per cent of patients during the first wave of COVID-19 and 40 per cent of those in second wave required hospitalization in Madhya Pradesh, analysis of figures show.

Amulya Nidhi of Jan Swasthya Abhiyan—an NGO working in the health sector—said the minuscule benefit figures make it clear that the Ayushman Bharat scheme was a total failure as far as providing succour to poor people suffering in the pandemic was considered. He added that the treatment cost under the PMJAY pertains basically to hospitalization and other basic charges but most of the patients had to pay from their pocket for drugs like Remdesivir, Amphotericin B; other life-saving drugs and in many cases for oxygen supply due to shortage.

“Since PMJAY essentially tries to provide free treatment to poor patients in private hospitals, the above facts and figures make it clear that this system had failed during the time of the deadly pandemic and therefore there is need to strengthen public health care system, upon which the poor people and even the middle-income group people often fall back on,” Nidhi said.

The RTI figures also point to the huge geographical imbalance in availing the benefits of the PMJAY. According to the figures provided, apart from 6.05 lakh free treatment, a total of 17,73, 464 COVID-19 tests were also done free of cost on PMJAY beneficiaries.

State-wise figures suggest that the three progressive states of Maharashtra, Karnataka and Andhra Pradesh were at the forefront of seeking the benefits of the scheme, providing has provided free treatment to 1.61 lakh, 1.62 lakh and 1.54 lakh PMJAY eligible persons. While the other two states did not provide the benefit of free testing, Maharashtra provided benefit to 1.25 persons—the total cost being Rs 424.39 crores. Karnataka and AP spent Rs 770.60 crores and Rs 413.98 crores respectively.

Shockingly, on the other hand, developing states like Uttar Pradesh and Bihar provided benefits to a mere 875 (testing) and 1,538 (treatment) and 19 (testing) and 2 (treatment) respectively. States like Punjab also faltered badly with no free treatment and just two cases of free testing, according to the RTI reply figures.

Chhattisgarh, which is half the size of parent state Madhya Pradesh, did far better with 38,179 treatment and 1,044 testing benefits.