Asif's experience has been somewhat unique, even for an undertrial prisoner 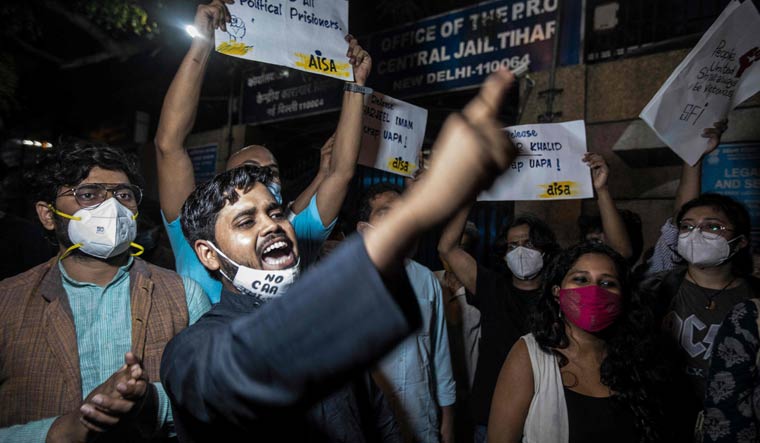 Asif Iqbal Tanha (2L), a student activist who were arrested a year ago in relation to the February 2020 Delhi riots case, shouts slogans after being released from Tihar jail in New Delhi | AFP

Asif Iqbal Tanha has spent hours reading reams of papers on the computer in the last one year. The Jamia Millia Islamia student was not only preparing to clear his supplementary exams for Bachelors in Persian, but spent an hour every day, in Tihar jail, reading the 17,000-page chargesheet filed by the Delhi police naming him, along with other student activists, as accused in the larger conspiracy behind the Delhi riots in February 2020, in which 50 persons were killed.

Asif, 25, was slated to graduate in 2020, but the past one year has been spent in uncertainty and anxiousness in a barrack with more than 50 inmates in one large hall with several beds. Phone calls once a week to his lawyer, daily calls from his family, afternoons and nights battling headaches and other hours spent on the computer reading about his alleged role in the premeditated conspiracy behind the riots, constituted Asif's life in Tihar. He was booked under the strigent anti-terror Unlawful Acitivities (Prevention) Act and arrested on May 19, 2020. He was granted bail by the Delhi High Court on June 15.

Asif's experience has been somewhat unique, even for an undertrial prisoner. Tihar jail was experiencing teething issues during the COVID-19 pandemic when Asif set foot in prison. There were no regular court visits, restrictions on meeting family and lawyers and even the police filed a digital chargesheet, which resulted in Asif asking for more time on the computer.

There was only one dedicated riots court and it was an uphill task for his legal team to get matters listed. Asif’s counsel applied for bail in July last year but the first order came only in September. Months of anxious wait soon translated into busy times for Asif. ''Once the chargesheet was filed, a lot of time was spent reading it since it was in the digital format. Accusations were not correct and legal recourse was needed to address each one of them,'' said a close associate of Asif.

But the jail superintendent was kind and allowed Asif to receive phone calls from his lawyer and family members regularly. ''Video calls were not possible. But Asif had to be patient since COVID-19 had created problems for all, including jail inmates,'' said an official.

Access to reading material was the only respite for this student who spent an hour on the computer every day, poring over the chargesheet and later, over his university books. Meanwhile, his legal team had moved an application in court to allow him to sit for exams which included three backlogs and one Masters entrance examination.

Asif's medical issues also caught the attention of jail authorities who arranged medical assistance for him to tackle headaches. Medical scans and medicines were provided to him.

Asif was lucky to get parole for 13 days in June to give his examination. He was staying at a hotel to complete his exams before he returned to the confines of jail. As luck would have it, the bail order came while he was just completing his exams. Asif was taken from his hotel to Tihar jail and released from there.

His family in Jharkhand are hoping his journey to and fro from Tihar ends here and he is set free. It has been difficult for them to understand the gravity of the allegations against him. ''His family is worried but resilient. They are aware of their son being part of many protests and movements,'' said another aide. In 2017, Asif was part of an anti-sexual harrassment protest in Jamia and there has been no looking back since.

However, the anti-CAA protests have changed his course of life. ''He has to complete his Masters and get into post-graduation. All depends on which way the case goes,'' said an aide.

The Delhi police case against Asif and others may become a test case for the anti-terror law in the country. Police officers said the riots in northeast Delhi was a premeditated conspiracy before the visit of then US president Donald Trump and the role of each accused person sheds light on how it was planned and executed. The Delhi police filed its chargesheet after months of investigation in September. It named Tanha and 14 others including JNU students and Pinjra Tod members Natasha narwal and Devangana Kalita as accused and booked them under the stringent Unlawful Acitivities (Prevention) Act and other sections of the Indian Penal Code.

On June 18, the Supreme Court issued a notice on the appeal filed by Delhi police against the bail granted to the student activists, saying the High Court judgment should not become a precedent. Clearly, the UAPA charges against Asif and others have become a matter of high legal importance, with Delhi police arguing that the UAPA is being turned on its head as ''right to protest'' cannot be an excuse for a premeditated conspiracy. All eyes are on the Supreme Court for now.